December 21, 2011 - The latest addition to Ottawa’s Algonquin College—the Algonquin Centre for Construction Excellence (ACCE)—is boasting of its different energy-efficient features, including a 22-metre-high biofilter living wall. The five-storey, 194,000-sf. centre was designed by Diamond Schmitt Architects in collaboration with Edward J. Cuhaci and Associates Architects, and consolidates the College’s building design and construction technology programs for 2,600 full-time students.  The building was constructed in less than two years, and classes commenced this September. 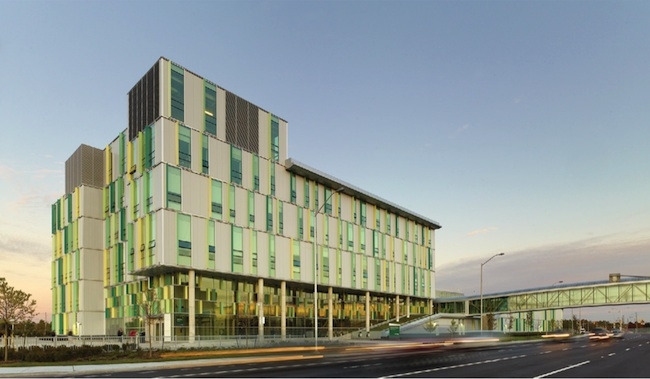 “The many sustainable design features of this building—from the high-performance envelope to the green roofs and living wall—serve as visible expression of the building’s identity as an energy efficient structure,” said Donald Schmitt, principal with Diamond Schmitt.

Calling ACCE as an “exuberant expression of green building design,” Diamond Schmitt says the facility acts a new gateway for the campus, which is linked by pedestrian overpass to a major transit hub, and is configured to operate with 24/7 access. The centre is targeting LEED (Leadership in Energy and Environmental Design) Platinum designation. Its energy-efficient features include:

• a heat-pump system with centralized heat recovery which uses hot water for heating;
• a building envelope with R-32 walls, triple-glazed R-8 windows and R-50 roofs which delivers an energy performance 67% better than the model National Energy Code for Buildings (NECB), says Diamond Schmitt.
• siting and orientation combine with solar shading on three sides of the building to minimize heat gain;
• integrated control system for lighting, daylight and shading; and
• a 22-metre (72-feet) high biofilter living wall which cleanses inside air by processing airborne contaminants through the exposed root system of a mass of tropical plants. Living wall biofilters reduce energy consumption by recycling inside air rather than drawing air from the outside, which has to be heated or cooled depending on the season, adds Diamond Schmitt. The biofilter is connected directly into the air handler for distribution throughout the building.

The building has two principle program and acoustic zones: flexible double-height bays for woodworking, welding, electrical, plumbing and other trades teaching, and a five-storey tower with learning labs, laptop classrooms and academic offices configured around an atrium with the biofilter living wall.

The Centre features different landscape elements, such as an undulating green roof, the biofilter wall, and garden spaces. According to Diamond Schmitt, these elements are designed to lower energy consumption, filter the indoor air, reduce storm water run-off, and enrich the student experience.

Also located throughout the building are built-in sensors which provide real-time and historical building diagnostics via on-site LCD screens and a unique website, allowing students to monitor the building’s temperature, humidity, air quality, structural load, and other dynamic features of its day-to-day operation.

— With files and images from Diamond Schmitt Architects