November 7, 2016 - The commercial building at 270 Albert St. in Ottawa, Ont. is being celebrated for its high degree of energy efficiency. After reducing its energy use by 25%, it has been recognized as Canada’s first project to be LEED v4 certified (the latest LEED green building program). 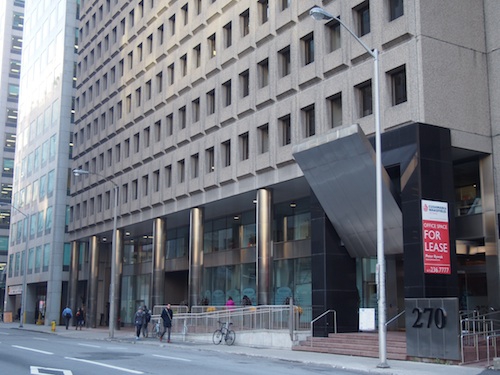 The office building at 270 Albert St. in Ottawa

Asset and property managed by Blackwood Partners, 270 Albert St. is a 14-storey, 164,000-sf office tower that had previously undergone several major retrofits since the building was constructed in 1975.

It was replacing the chillers that made the biggest difference when it came to cutting energy costs, said Merv Cundell, property manager of 270 Albert with Blackwood Partners Corp.

Cundell added they were able to downsize the condenser pump as well because they put a new cooling tower in, replacing the natural draft one before that was “like an antique”.

“That was a huge savings just on those pumps alone. I saw it in my electrical bills right away,” Cundell said.

“Before on a hot July day, we’d have to start the system up at 2 am. Now we can start it up at 6 and we can reach where we want to be in an hour or less. It’s really quite amazing.”

Additionally, 10-minute timers in all washrooms and motion sensors on the two basements levels help keep the lights off.

“We talked about putting in an automated system for the floor lighting but we have guards 24/7 so they turn the lights off when the cleaners leave and back on in the morning,” Cundell explained. “They do floor rounds so if they find them on, they just flick them off. Works better than the sensors really and less maintenance this way.”

The first thing Blackwood did when it took over the building in 2008 was look at how to up the energy efficiency and put it in the capital plan, Cundell said. And they’re not done yet. He couldn’t share any specifics but said they would be working on even more tightened energy use upgrades in the near future.

Overall, the operations team at 270 Albert reduced energy use by 25%… and this was even after an energy audit in 2013 found the multi-tenant building already operating efficiency, according to the Canada Green Building Council (CaGBC). The latest upgrades resulted in an energy use intensity of 20 ekWh/sf and an Energy Star score that placed the building in the 91st percentile amongst its peers.

The office building at 270 Albert St. in Ottawa