December 18, 2015 - Tenneco is one of the world’s largest producers and distributors of automotive exhaust systems for the replacement and original equipment markets, including clean air and ride performance products and systems for the automotive, commercial truck and off-highway markets and aftermarket. Its customers include several blue chip behemoths, such as Toyota, General Motors and Lexus. 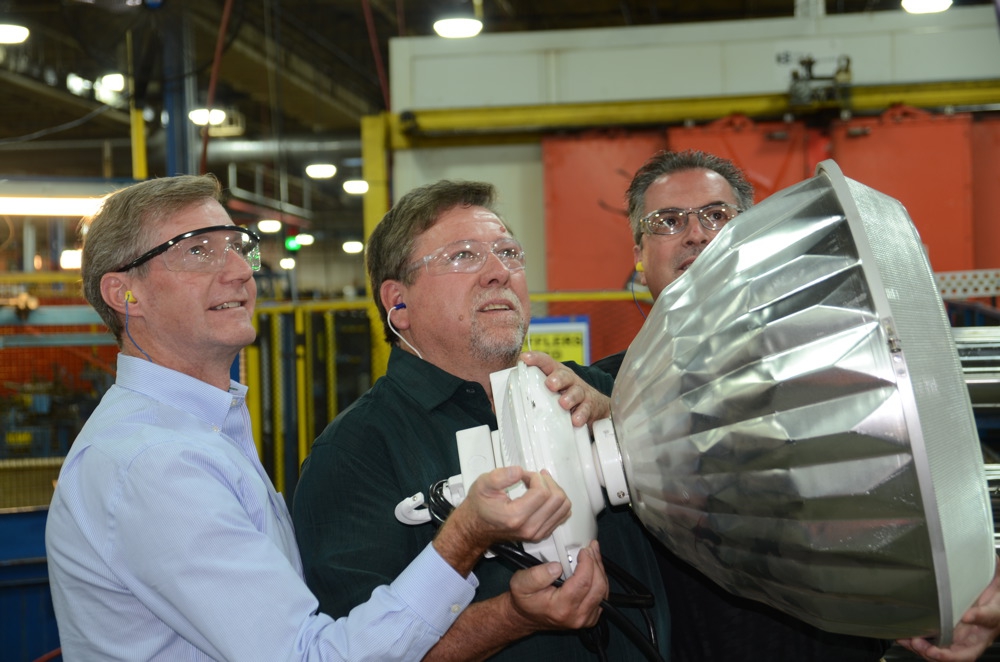 The manufacturer tested induction lighting that boasts a 100

In 2013, Tenneco began looking for an energy-efficient alternative to its costly, hot and high-maintenance 1000W metal halide highbays at its 675,000-sf manufacturing and distribution facility in Cambridge, Ont.

The existing facility was filled with hundreds of 1000W MH fixtures that generated an enormous amount of heat which, during the hotter days of a typical Ontario summer, had become a major contributor to heat-related mandatory production shutdowns.

These shutdowns were exceptionally costly, so Tenneco sought a solution that would reduce the heat load in the building without adding additional cooling expense. Additionally, the 1000W MH fixtures were causing inefficiencies because their start-up sequence took upward of 15 minutes and, any time the power went out (which was known to happen periodically), the whole plant had to shut down to wait for the lights to cool down and restart, resulting in more lost revenues and unwanted downtime.

Time to do some homework

Jeff Johnson, Tenneco operations manager, began testing with T8s. “Our corporate standard was T8s, so we started to go down that path. When we went to some other facilities, we didn’t really like what we had seen… fluorescent fixtures high up in the ceiling with multiple bulbs burned out. In talking with the maintenance staff, [the T8s were] high maintenance,” he explained.

They then moved on to testing LED fixtures, which have been generating a lot of publicity and are being aggressively promoted by many suppliers and consultants.

“The LED lighting […] produced a lot of glare and overshadowing on the parts. We just couldn’t really see. We’ve got to make sure that our welds are perfect for our customer,” said Sean Kavanagh, Lexus Division supervisor at Tenneco.

In the end, “The LED lights that we put up were only up for about a month,” explained Tony Melo, plant manager at Tenneco. “Nobody really wanted to work underneath them. We went back to just the metal halide light”.

Then Tenneco began testing induction lighting that, in this case, was sourced from Reonac Energy Systems (reonac.com)—a Canadian company headquartered in Montreal, with regional offices in Ontario and Alberta. Induction lighting is known for its long life (100,000 hours), high efficiency and high quality of light. It is most commonly found in commercial and industrial applications such as warehouses, factories, parking lots and sporting facilities.

“We did intensive seminars with the local hydro facility, and we spoke to other facilities that had induction lighting. We really did our homework! The [induction lighting] was a better product and, in the long run, a cheaper product,” noted Melo. “We are seeing the savings in our hydro consumption. We’ve been tracking it and the savings are real. The feedback from the team members on the shop floor has been phenomenal. They love the lighting. They can’t believe how much brighter it is.”

Lead hand and welder John Pereira finds the induction lighting “brighter, but more uniform, without casting too many shadows,” adding that, “It’s easier for us to catch a small miss or a hole or a crack. It has made it easier on our job.”

A decision is made

After all the research, testing and employee feedback, Tenneco ultimately settled on Reonac’s Think induction high-bay lighting for a complete retrofit of the Cambridge production facility. The solution met Tenneco’s original goals for a lighting system that offers energy and maintenance savings while reducing heat.

The retrofit project went on to receive over $450,000 in rebates—one of the largest single-project lighting rebates granted by the province’s saveONenergy program. The retrofit will save Tenneco over 50% in lighting costs, resulting in over $8 million in savings over the next 10 years, with a payback period of less than one year.

Kevin Ablett is an energy efficiency specialist focused on helping commercial and industrial businesses increase their profits by decreasing energy and maintenance costs. He can be reached at kablett@reonac.com.

The manufacturer tested induction lighting that boasts a 100