June 27, 2014 - Schneider Electric recently hosted 24 finalists in Paris, France, for the conclusion of its global business case challenge Go Green in the City and, sadly, the only team from Canada to make the finals—the University of Waterloo’s Reid Miller and Yuheng Jiang (the “Waterloo Warriors”)—went home empty-handed... somewhat. 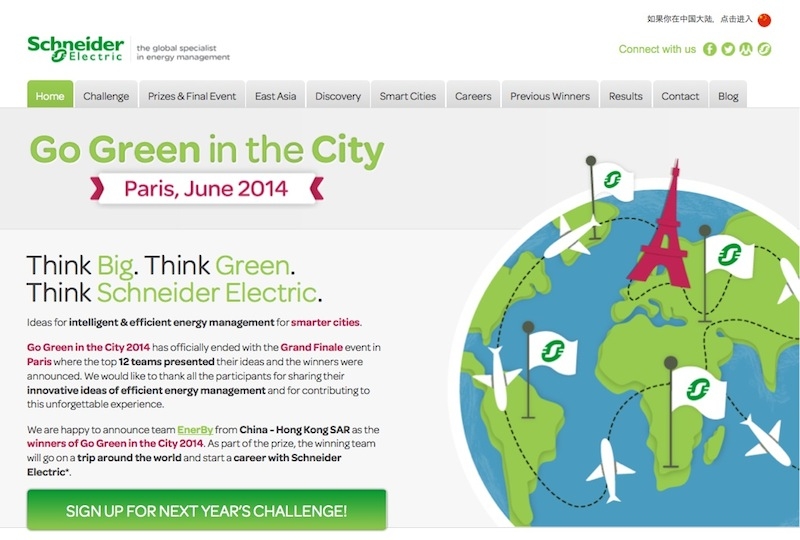 The winners of this year’s challenge are from Hong Kong. The laureates Jin Deng Keith Chan and Man Ki Lee from the University of Hong Kong won the challenge for their idea that helps people efficiently monitor, manage and use their energy consumption through a mobile application.

The 12 finalist teams, including the Waterloo Warriors, presented their ideas for efficient energy management in smart cities to a jury composed of Schneider Electric senior management. (The only other qualifying Canadian team—team Western University, comprising Gareth Everard and Kamila Mukherjee—did not make the finals.)

“From the success of the fourth edition of Go Green in the City, we can see the increased interest of students around the world in energy issues,” said Karen Ferguson, executive vice-president of global human resources at Schneider Electric. “Attracting further talents in a very competitive market is a real challenge for Schneider Electric, and this competition allows us to connect with students who share our passion for creating a more sustainable future.”

During the four-day event, finalists visited the company’s facilities, networked with employees and attended career-building workshops. They also had the opportunity to tour an energy-efficient solar village under construction for the Solar Decathlon, a student competition in Versailles (France).

The Go Green in the City competition has received a total of over 14,000 participants in the last four years, and expanded its scope from eight countries in 2011 to 159 countries in 2014.