News
Double-wall construction is where high efficiency is at, says B.C. builder

March 24, 2016 - The BC Building Code now requires builders to report the effective R-value of their wall assemblies, rather than the nominal (estimated) value. And as the traditional becomes a thing of the past, builders are seeking new energy-efficient wall solutions. 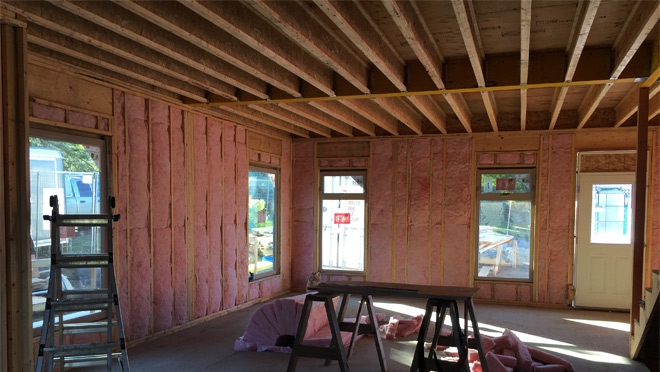 One B.C. builder says the answer is double-wall construction.

Stan Boychuk was involved with the Saskatchewan Conservation House, considered one of the first high-performance demonstration homes ever built in North America. Next he worked in the Yukon, where a rebuild of the Friendship Centre in Whitehorse also used construction techniques that delivered on energy savings.

In both projects, Boychuk helped develop double-wall construction: a system where an outer, 2×4 structural wall holds windows and doors, and an inner 2×4 wall contains electrical, mechanical and plumbing systems. He has used the system in his own home in Esquimalt, which he believes may be the first double-wall home in B.C.

Double-wall area is exempted by municipality, resulting in no loss of indoor living space

The key to the efficiency of his own home is sandwiched between the interior and exterior wall assemblies. There, two layers of R-10 Styrofoam insulation are completely taped and acoustically sealed, creating an integral vapour barrier. That means there’s no thermal bridging, and no penetrations through the barrier.

“It actually makes it easier for plumbers, electricians, and the mechanical people,” says Boychuk. “They don’t have to worry about air sealing because everything goes through the secondary wall, and it’s entirely inside the vapour barrier.”

The home’s exterior walls are R-32 with triple-glazed windows, with R-50 insulation in the ceiling. The foundation walls are R-20 insulated concrete form (ICF) construction, with R-20 insulation under the basement floor. Heating is in-floor in the basement, main, and secondary levels. And Boychuk says a heat recovery ventilator is 70% efficient in terms of pre-heating incoming air, bringing the home to near net zero in terms of energy consumption.

The home also stores rainwater and recycles water from showers to use for toilet flushing and exterior water usage, and is wired as a smart house for electrical usage, helping systems run efficiently.

The energy efficient walls of Boychuk’s house are a foot thick. He says the Township of Esquimalt, like other leading municipalities, doesn’t penalize the builder for the thicker wall. Instead they allow the increased area of thicker wall—in this case about 100 sf—to be added elsewhere to the home’s living space. Thanks to Esquimalt’s bylaw, Boychuk says he was able to build a much more efficient home while maintaining the indoor living space at 3000 sf.

Boychuk says his goal with the new build was to demonstrate that there are ways to make spaces more liveable, as well as reducing the consumption of resources used in homes.

Boychuk says double-wall construction comes with both additional costs and savings compared to standard construction. It costs more for additional materials and time spent framing and insulating; finishing is more expensive because doors and windows don’t come with pre-made jams that fit the thicker walls.

Offsetting the actual cost, however, is the additional allowable floor space, and significant savings on sub-trades for electrical, mechanical and plumbing work.

“On a house with an interior vapour barrier, every electrical box that you install has to be sealed. In this case you don’t have to do that, because everything is already inside the vapour barrier. It takes electricians far less time and you can negotiate that savings.”

Boychuk says overall, the highly efficient home cost approximately 10% more than a standard build. However, he plans to make up the cost in energy savings.

“It’s huge. The operating expenses go down massively,” he says. “When we were doing the calculations of this house, in terms of the savings with regard to electricity and natural gas, we expect to save about 80% on heating and cooling costs compared to a conventionally built house.”

Boychuk says homebuyers are increasingly educated and knowledgeable about home construction, and are seeking homes that save energy and are comfortable to live in. He says it’s time to make the shift to high efficiency homes.