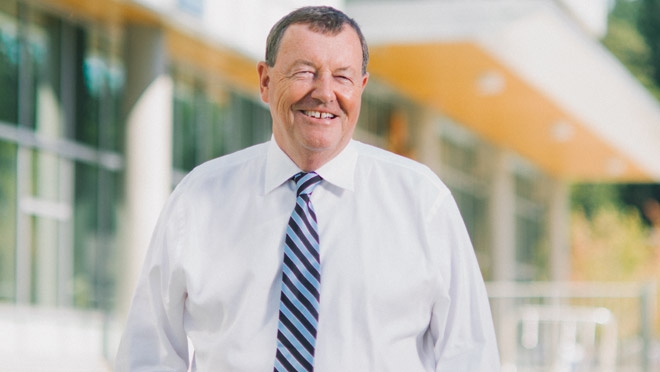 The Fraser Health Authority has set a goal of saving nearly $400,000 in its fiscal 2015 through energy savings measures. In only two years, Teck saved 16 GWh of electricity. The company expects sustainability efforts will save 62 GWh in 2014-2015. Overwaitea reduced its annual carbon footprint by 2000 tonnes of CO2 by upgrading the refrigerant system in five stores. Surrey schools have saved more electricity than any other school district in British Columbia.

PHOTO: Alasdair MacKinnon, director of energy management and sustainability for the Surrey School District, is among the 2014 winners of the Power Smart Excellence Awards. Surrey won the Conservation Awareness & Engagement Award for embedding energy efficiency throughout the school district, from the facilities and IT departments to the school board office and classrooms. Photo courtesy BC Hydro.

Conservation of electricity is critical to BC Hydro meeting future demand, says the utility, which is projected to grow by as much as 40% over the next 20 years. As much as 78% of the energy demand anticipated in the future will be met through conservation, added BC Hydro.

Other recognitions
Nanaimo Regional Hospital—also a Power Smart Excellence Award winner—was constructed with efficiency in mind. Sensor-controlled lighting and an efficient building envelope are only two elements that have helped the hospital to consume less energy in its first year of operation than was predicted.

The Nechako Lumber plant (a division of Sinclar Group Forest Products) is reducing the amount of electricity it draws from BC Hydro by up to 30% using waste wood to generate power.

In support of BC Hydro’s Appliance Rebate Program, Samsung Electronics Canada accounts for more than 6000 appliance rebate applications in the past two years, and Samsung doubled the rebates to consumers.

Finally, London Drugs and The Home Depot Canada each raise awareness of the importance of saving energy while making efficiency products readily available on shelves.

Related
Daylighting at work: it’s time we let the light in
UBDAWG paper says better utility billing data will transform energy management
Veridian Connections names its 2015 “Conservation Champions”
“Reeling in the many benefits” of efficiency at BC fish hatcheries
Tags