February 26, 2016 - EnerQuality, certifier of energy-efficient homes, cracked open the future of homebuilding yesterday during its 2016 Housing Innovation Forum in Toronto, examining what the industry will look like in a low-carbon economy. 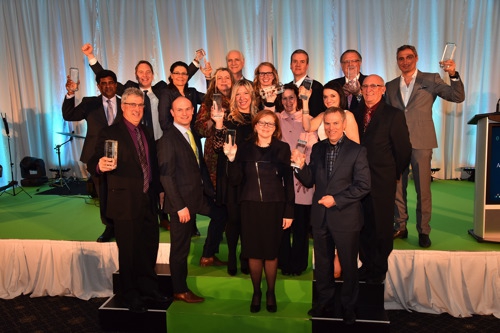 EnerQuality's award winners throw out a cheer for energy efficiency.

The event’s theme was “Next Gen. Next Ten”, and referred to the next generation of codes and programs slated for 2017, as well as foreseeable market and policy shifts.

While the 2012 energy efficiency objectives from the Ontario Building Code just went into effect this past January, Chris Thompson, manager of Building Code Policy Development with Ontario’s Ministry of Municipal Affairs and Housing, said Draft SB-12 is currently “undergoing targeted stakeholder consultation”. Some key components of this draft, according to Thompson, include: tables in both imperial and metric measures, air and geo-exchange heat pump use clarified, HRVs required in all packages, and U and Effective R values in the tables.

Thompson added that SB-10 development is underway and expected to be released this spring.

She also added pricing has decreased and it’s about $65,000 on top of the original home cost to take it to NZE.

Connecting to the grid remains one of the most typical challenges for NZE homes, added Alison Minato with the Minto Group. Jennifer Weatherston with Reid’s Heritage Homes noted convincing municipalities to look at the bigger picture when it comes to NZE cost savings is also no easy task.

The 2015 EnerQuality Awards were also announced last night and Reid’s Heritage Homes (headquartered in Cambridge, Ont.) was the big winner. The company scooped up the inaugural Net Zero Builder of the Year award, the Building Innovation – Low Rise award, and the Best Green Marketing Campaign of the Year.

The Energy Star for New Homes Builder of the Year award, in the Large Volume category, went to Mattamy Homes, who earned the achievement for the third time.

The Minto Group was awarded Ontario Green Builder of the Year for a second year in a row. The award is presented annually to a builder that “raises the bar for the rest of the industry through its leadership in improving the environmental, energy-efficiency, and overall image of the industry,” EnerQuality stated.

Additionally, CHBA’s Sonja Winkelmann was recognized as EQ Leader of the Year.

Finally, LiteBuilt took home the trophy for the 2nd Annual Innovation Gauntlet, a Dragons’ Den-style contest, for their LiteBlok product, what they claim is a mortarless, floatable, light and environmentally-friendly interlocking building block.

EnerQuality was founded in 1998 as a partnership between the Canadian Energy Efficiency Alliance and the Ontario Home Builders’ Association with the mission to accelerate housing innovation to improve building performance.

EnerQuality’s award winners throw out a cheer for energy efficiency.