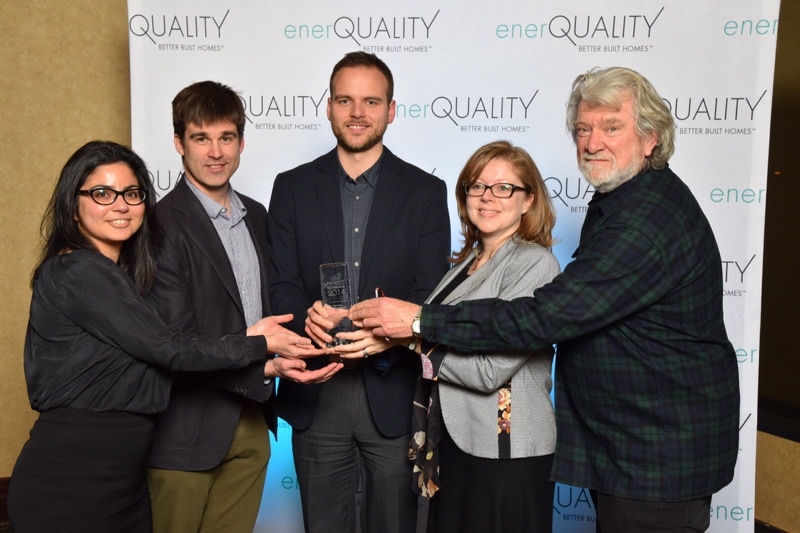 (Founded in 1998 as a partnership between the Canadian Energy Efficiency Alliance [CEEA] and the Ontario Home Builders’ Association [OHBA], EnerQuality’s mission is to “transform Ontario’s housing into the most energy-efficient and sustainable in the world”.)

The Minto Group (photo 1) scored three awards at the 2015 EnerQuality Awards in Toronto; among them, the Energy Star for New Homes Builder of the Year in the Large Volume category.

The Energy Star Champion of the Year award was presented to Al Schmidt of A&J Energy Consultants, who works with builder clients to implement turnkey processes for value-added, energy-efficient construction.

Peter Gilgan, founder and CEO of Mattamy Homes, was inducted into the EnerQuality Hall of Fame (photo 2). This award is presented annually to an individual who, over the course of their career, has made a lasting impact on energy efficiency and green building in the housing industry. Mattamy Homes has built more than 11,000 Energy Star-qualified homes across Ontario, and was one of the first builders to enrol homes in the program.

EnerQuality’s Leader of the Year award was provided to Shannon Bertuzzi of Enbridge Gas Distribution in recognition of extraordinary advocacy and leadership driving the growth of energy efficiency and green building in Ontario over the past year.