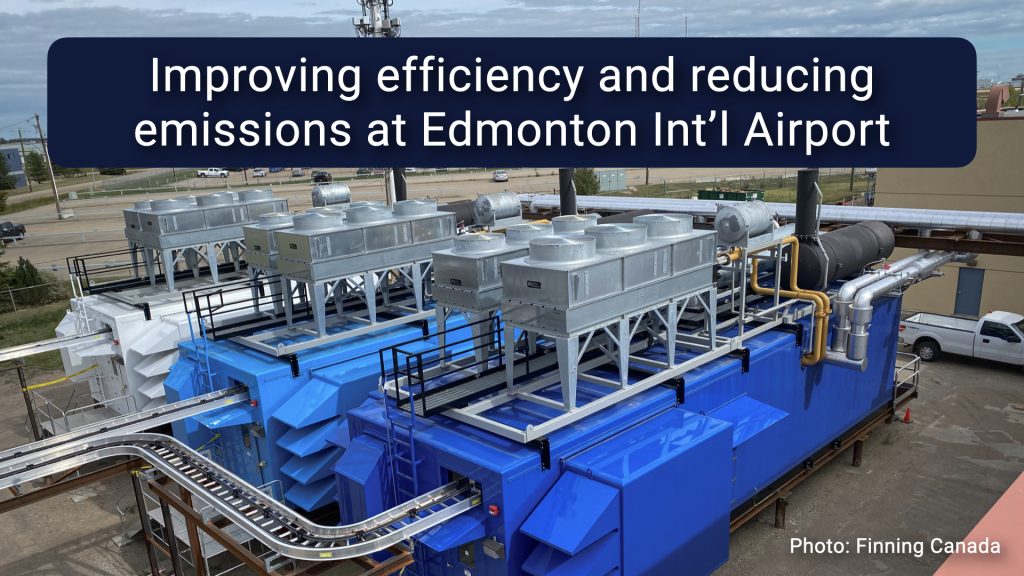 July 14, 2022 – Greater energy efficiency, reliability and lower costs are top priorities for powering any business. Since nearly two-thirds of the energy used by conventional electricity generation is wasted in the form of heat discharged to the atmosphere, CHP is a solution that can offer huge benefits in efficiency.

Solutions that offer lower emissions while being are affordable and reliable are propelling a growing interest in non-traditional CHP markets, such as urban industrial settings, hospitals, ski resorts, remote northern climates and airports.

Seeking a solution for power and heat redundancy

“We need electricity redundancy, and heating redundancy,” explained Steve Maybee, vice-president, Operations & Infrastructure, with Edmonton International Airport. “We need a guarantee of power to our airfield and to our building. So finding ways to produce that power in a sustainable way was always something that we were looking for. It all came together at the right time and […] we made that decision, with the right business case to move it forward.”

So the airport decided to proceed with a combined heat & power (CHP) solution which, besides providing electricity redundancy, would also provide heating redundancy for EIA’s hot water system.

“The generators supply electricity, and the waste heat from the engine is used to power the facility’s hot water circuits,” said Chris Schurmans, Finning’s project development manager who worked with EIA on its customized power generation system.

“Because we are capturing the heat from the generation of electricity and using that heat, we are utilizing 85% total efficiency of the energy input, 45% electrical efficiency and close to 40% thermal efficiency,” Schurmans continued. “Having a solution like this offsets the need for water boiler use onsite, which reduces natural gas consumption while at the same time offsetting less-efficient utility power generation, such as coal plants. A benefit that reduces both emissions and costs.”

“Cogen is designed to provide a baseload of power and heat,” explained Roger Steele, EIA’s manager, Technical & Utilities. “So it doesn’t supply all the heat or all the power to the terminal building. It provides a baseload at a very economical cost.”

The system provides a baseload designed around an overall load profile, which varies hour to hour, day to day, and season to season. The outcome drives an economical model that helps identify the utilization and cost perspective. 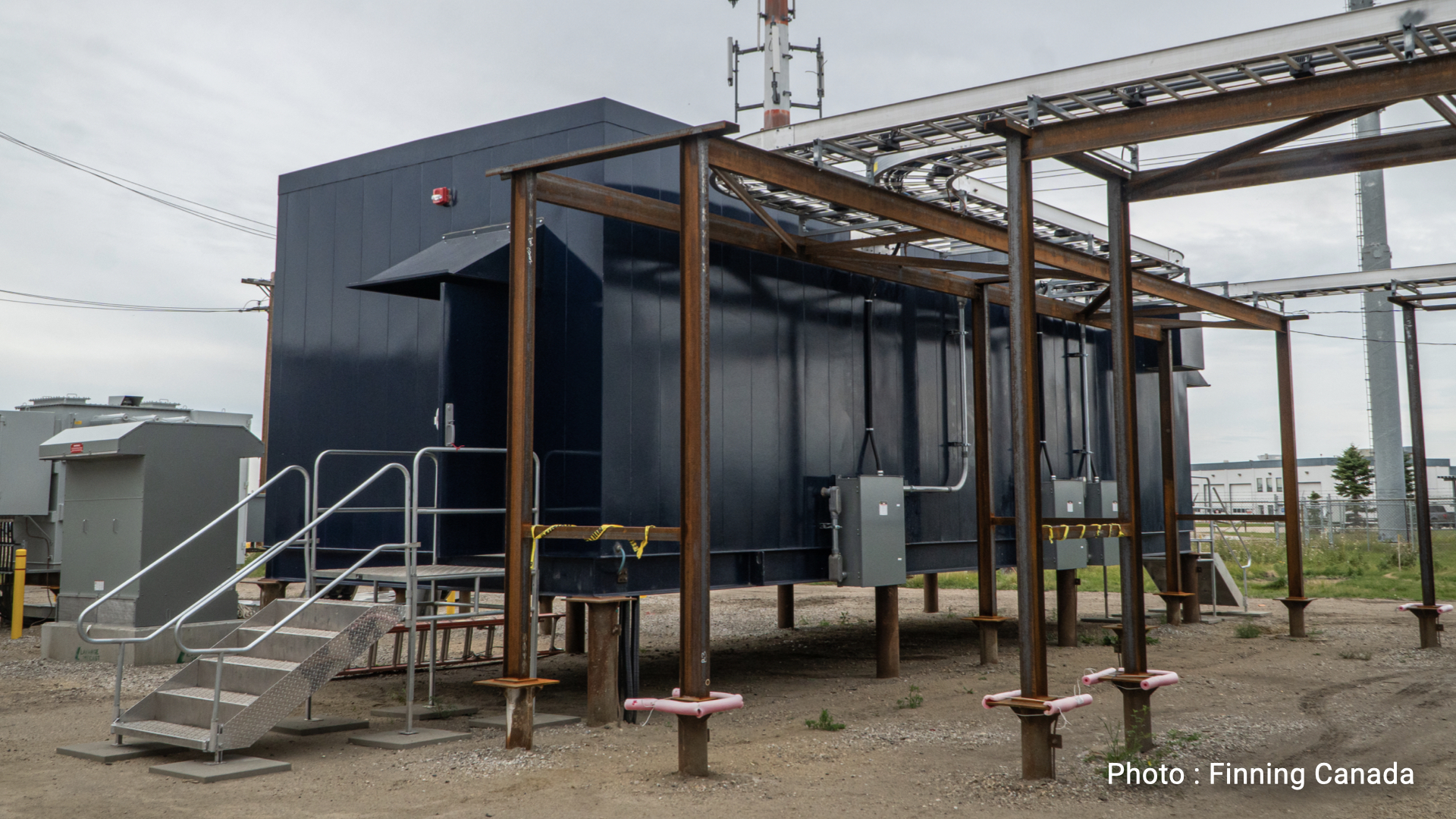 The eHouse (a.k.a. electrical house) contains the switchgear and control system, which interconnect and distribute the heat & power source to the airport. Photo: Finning Canada.

“Designing a project like this is a collaborative effort with the customer,” added Schurmans. “We wanted to make sure the customer was getting what they were looking for, and we understood that they required options when sourcing power generation solutions.”

The system comprises three (3) Enclosure Packaged Cat G3512H natural gas, high-efficiency generator sets, which generate 1.4 MW at 4160V each. The units are integrated with the airport distribution via the eHouse (a.k.a. electrical house) which contains the switchgear and control system, via two transformers and distribution feeds.

The genset enclosures were designed by Finning and locally engineered and manufactured to withstand harsh climate conditions. Everything was customized for the customer’s specific application, including the heat recovery, controls and switchgear, and site-specific sound attenuation. 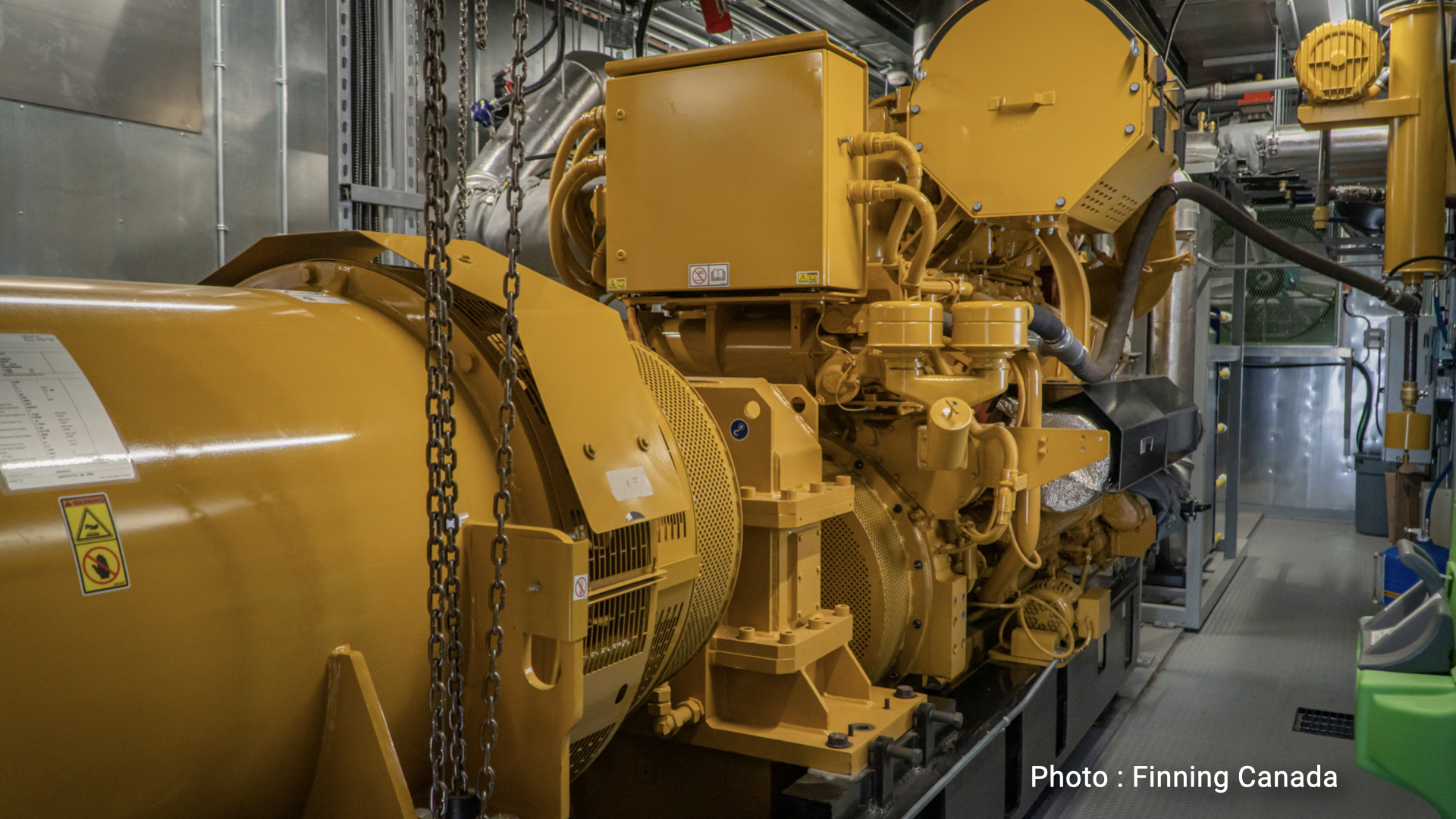 Serving as a springboard for others

Although cogeneration is not a new idea, there are applications where it makes a stronger case from a cost and energy efficiency perspective.

“We’re getting the green benefits; we’re getting the redundancy and resiliency; and we’re also getting the utility savings,” added Steele. “The net is almost $1 million per year. That is really going to help with the payback of these units.”

“The more we looked at it, the better the business case became. It is the perfect fit for our airport,” said Steele. “We are really hoping that this project is the springboard for others in Alberta to look at this technology for use in new or existing buildings.”

Cogeneration has not been used a lot in Alberta, continued Steele. “So we’re happy to be innovative within Alberta, showing that this can happen in Alberta [with] jobs for Albertans, and is green for the environment.”

“Having this cogeneration facility, which uses Alberta’s natural gas to produce power, and then use the waste heat generated to heat our terminal building is a win-win all around for us,” concluded Maybee.

Dan Tuan is the director of Power Systems with Finning Canada. He has been with Finning for 21 years, including 18 years in Electric Power Generation. He is also a member of the Advanced Energy Advisory Board of North America, and has served the primary power generation market segments in marine, mining, mission critical and renewable energy.