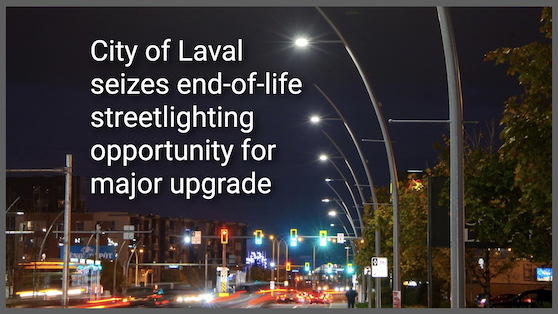 March 17, 2021 – The City of Laval has approved the implementation of its project to convert 37,000 streetlighting fixtures to LED luminaries with smart controls.

“This project comes at a good time: a significant portion of the lighting network has reached the end of its life cycle and must be replaced,” said Marc Demers, Mayor of Laval. “This state-of-the-art technology with intelligent control system has proven its worth, and Laval is following in the footsteps of other forward-thinking Canadian cities that have adopted it […]”

Dimonoff and Pierre Brossard Ltée (a subsidiary of Black & McDonald) have been tasked with executing the project, which will be carried out over a period of three years for a total investment of $34.5 million.

The conversion project is expected to result in annual savings in excess of $2.75 million, mainly through reduced energy and maintenance costs. The anticipated electricity savings amount to 15 million kWh.

The retrofit project is estimated to reduce GHG emissions by some 10,607 tCO2; plus, with a life span of 25 years, the new streetlighting is expected to significantly reduce maintenance truck rolls, reducing GHG emissions even further.

The city has expressed interest in using the intelligent streetlighting infrastructure in the future to link other systems and sensors that will “continue to improve the efficiency and quality of service it provides to its citizens”.

The first units are expected to be installed this month. The conversion of all streetlights—as well as the deployment of intelligent controls—is expected to take 12 to 18 months. A second phase, consisting of decorative and architectural fixtures, will follow thereafter.

The project will include 88 gateways, with a mix of cellular and urban computer networks, and one (1) intelligent central control system (Smart City Management System [SCMS], SAAS version.