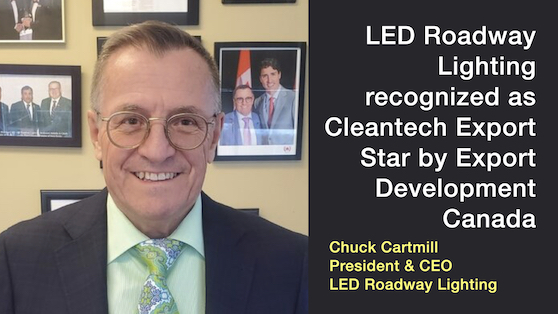 “We started in basic streetlights but, given the commoditization of the streetlighting business and products, we’ve moved into cleantech with our new Liveable Cities division,” said Chuck Cartmill, company president & CEO.

On top of LED streetlighting solutions—which are inherently more energy efficient than their predecessors—LED Roadway developed the Toolless Sensor Platform (TSP), which enables clients to replace an existing photocell on any streetlight with a wireless sensor that can be used to monitor everything from air quality and noise levels to traffic flow, and support dynamic dimming to conserve energy.

EDC’s Account Performance Security Guarantee (PSG) has allowed LED Roadway to expand its capability with its bank to issue both bid and performance guarantees.

“With this program, we’re able to issue standby letters of credit as guarantees required under contracts, or as part of bids, without impacting our operating line of credit,” added Cartmill.

“Our hope is that these success stories […] will both inspire companies and support continued growth within the sector,” said EDC’s Dan Mancuso.

Founded in 2007, LED Roadway Lighting Ltd. is a Canadian-owned and operated company headquartered in Halifax, with primary manufacturing in Amherst, N.S. Its smart streetlighting products are used in over 60 countries, says the company.