April 1, 2019 - Much like the athletes who competed there during the 1976 Summer Olympics, Montreal’s iconic Olympic Park sports complex has received first-place recognition. 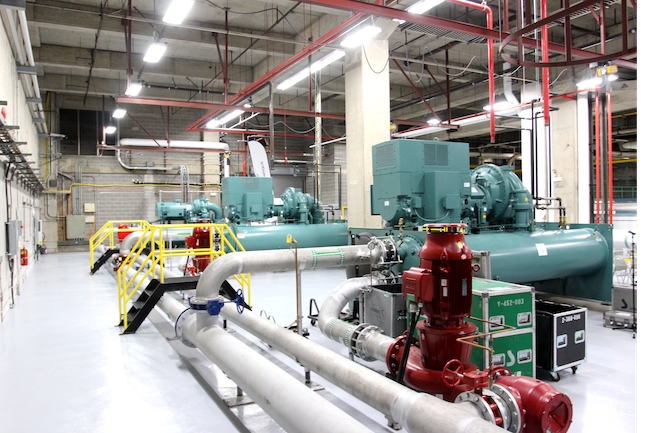 Built in the mid-’70s, this expansive site underwent a deep energy retrofit from 2015 to 2018, addressing inefficiencies caused by aging HVAC and lighting equipment. By achieving reductions of 31% in energy use, 26% in energy bills and 57% in greenhouse gas (GHG) emissions, the project went on to win first place in the existing public assembly category of the 2019 American Society of Heating, Refrigerating and Air-conditioning Engineers (ASHRAE) Technology Awards.

Led by Quebec-based design-build firm Ecosystem, the project relied on a whole-system approach to simultaneously address all energy-related issues. Ecosystem was selected following a two-part request for proposals (RFP) process, in which it offered the best value of any bidding company by minimizing project costs, energy use and future expenses.

“We didn’t specify a lot of equipment,” explains Dominic Desjardins, energy manager at Olympic Park. “All the companies took about six months to do their own designs and after that we selected the best solution with the best payback.”

Heating and cooling
Ecosystem implemented numerous measures to deliver this payback, the vast majority of which focused on the site’s HVAC system. For example, the waste created by the facility’s steam heating network was addressed by a conversion to hot water.

“The steam to hot water conversion reduced energy waste in the distribution network,” says Olivier Matte, technical communications director at Ecosystem. “Also, you have higher efficiency, because obviously if you’re heating water rather than producing steam, your boilers are working at a lower temperature, hence they are reducing the flue gas temperature and waste.”

Three steam boilers at the site’s main plant underwent this conversion, as did the primary steam heating loop. However, stand-alone steam-producing generators are still used to provide humidification.

“Taking out the steam from this building yielded more savings than we expected,” says André-Benoit Allard, project director with Ecosystem. “A lot of the steam wasn’t providing any services to the building; it was just there to keep the system warm.”

Heat recovery pumps were also introduced as an alternative to heat exchangers, boosting the efficiency of hot water production and minimizing heat loss by providing hot water directly to the secondary loops. Sized to assume the building’s full cooling load in winter and full heating load in summer, the pumps return a small amount of heat to the hot water loop during the cold months. In summer, they are used to partially recover the cooling load.

“The heat pumps and the conversion from steam to hot water are really working hand-in-hand here,” says Matte. “Looking at the whole system rather than one piece of equipment at a time has allowed us to integrate all this together in an optimal design.”

The cooling system was also updated to resolve issues created by decades-old equipment, such as a wooden cooling tower built in 1976.

“We had a big chiller plant, but the equipment was really old and the efficiency was really low,” says Desjardins. “We rebuilt the chiller plant, including the four chillers and the cooling tower that went with them.”

Six smaller cooling towers were installed to replace the wooden one, increasing redundancy and eliminating an underground condenser water reservoir. This resulted in a 99% reduction in water use, down from 2.7 million L to 25,362 L.

The chillers, in turn, were resized to expand their cooling load range, offering increased flexibility for Olympic Park’s varied events. Additionally, one of the four was moved away from its counterparts. This distinct placement, along with the downgrading of the gas boilers from 60 to 45 MBTU/h, reduced the once-constant supervision requirements for these systems, which now need to be monitored only one hour of the day.

An electric boiler has also been added to reduce reliance on natural gas. This, combined with the electric heat pumps, allows the facility to operate virtually GHG-free in summer. Also, thanks to the prioritization of electricity over gas, subsidies were granted to Olympic Park by the provincial government (through an emissions reduction program and through Hydro-Quebec) and the gas supplier. Operating the boiler during off-peak hours also helps drive down costs.

A solid portion of these savings can also be attributed to improvements in the lighting system. Originally, Olympic Park was lit by approximately 44,000 T12 fluorescent tubes, which needed to be replaced by other products, due to their low efficiency and limited availability.

LED fixtures were installed in the tubes’ place, both in the site’s stadium and in a 4,000-spot parking area. These offer a long service life—with an estimated seven years before any lights at Olympic Park will need replacement—and significant energy use and cost reductions.

Finding one solution
With an investment of $22.7 million and a 12-year payback period, the retrofit offers a guaranteed $1.3 million in annual savings. However, when asked what led to the ASHRAE Technology Award win, most team members point not to the financial results or the more efficient equipment, but to the integrated project approach.

“The results are impressive, but there wasn’t really any mechanical innovation,” says Desjardins. “It’s more in the way the project was managed, with a partnership and guaranteed results and operation.”

“I would highly recommend all managers look at the project in the same way we did, as an integrated project,” says Landry. “That means we address all the problems we have in the building at the same time and find a solution.”

Across the board, the consensus is that separately replacing each piece of equipment, rather than considering how everything will work together, would result in an inflated project timeline and cost. Taking a holistic view and ensuring close collaboration between client and contractor helps create a flexible design that addresses all issues and can be adapted as challenges arise.

“A big part of the success was co-operation with the client,” says Allard. “We talked to people who worked at the site to make sure they understood what we were doing and to get their feedback. The goal was to consult with them to try to provide something they would like.”

This collaboration was also key in overcoming challenges such as the size of the stadium (one of the largest buildings Ecosystem has ever worked on). To ensure its team built up extensive knowledge of this massive facility, Ecosystem stationed team members on-site five days a week, working closely with Olympic Park’s engineering and infrastructure department, facility manager and operators.

“A building like this, a lot of people think it’s a big empty shell, but many things are happening in there,” explains Matte. “The heating and cooling loads are highly variable depending on if there’s an event or not and you can’t simply postpone an event because of the work we’re conducting. Even though you’re working on the central mechanical systems, you cannot have major shutdowns. Everything must be carefully planned.”

This was a particular challenge when it came to updating the cooling system. With a major baseball game scheduled in the stadium shortly after work began, the project team had to strip down the old cooling towers, remove the chillers and install new equipment within three months to provide 5,000 tonnes of cooling capacity to attendees.

“We were able to buy the major equipment at the beginning of the process,” he explains. “After that, we had a construction manager on-site all the time to make sure we would be able to meet the schedule.”

Ease of operation
Although the construction phase of the retrofit has been completed, Ecosystem’s work is far from over. An optimization team is continuing to spend time at Olympic Park, fine-tuning the installed equipment to ensure optimal levels of comfort. Energy and financial savings are also being monitored to confirm all guarantees are met. Further, Ecosystem is training Olympic Park’s own team in the use of all the new equipment.

“The operations are more complex than before, but we can operate the whole stadium in a better way and make sure our equipment works efficiently. Before, it was much harder to do that,” says Desjardins. “Also, it’s much easier to do maintenance than before.”

“We’ve now got better control of our equipment, especially because we have the chillers and the heating system all centralized,” says Landry. “It’s very easy to operate all that equipment now.”

So, the practical advantages of this retrofit are clear. Carefully chosen equipment combines with operational strategies to generate significant savings for a large facility that must manage a constant barrage of expenses.

“We basically guaranteed the project cost, the financial incentives it could have and the savings,” says Matte. “I think that was important for Olympic Park. This project is a strong case that they’re doing their part to reduce energy consumption in a cost-effective way.”

Carly Midgley is a freelance writer and editor based near Toronto. She has covered numerous aspects of the architectural and engineering industries in her work, drafting technical articles for various trade publications. She can be reached via email at hello@carlymidgley.com.