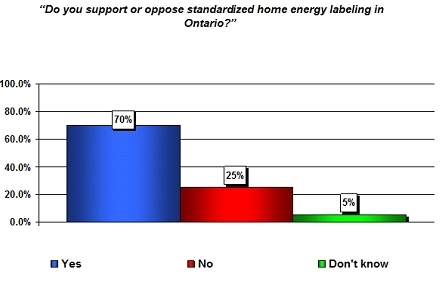 According to NAIMA Canada, home labelling is intended to allow individuals to calculate the energy efficiency of a home at time of sale, with the intent that consumers better understand the operating costs associated with their new purchase – the “second price tag.” Properly insulating a home is one of the most cost-effective measures a homeowner can do to increase their home’s energy efficiency, it said.

“Ontarians are ready for regulated energy efficiency labelling to one of the most expensive purchases they will ever make in their lifetime – their home,” said Jay Nordenstrom, executive director of NAIMA Canada. “They want to know how much a home costs to operate and what they can do to improve their energy efficiency, decrease their utility bills, and increase the value of their homes.”

These polling numbers are higher than data collected on a similar matter in 2009. At that time, when asked about their support or opposition to standardized home energy labelling, more than six in 10 respondents (62%) stated they support the measure, while less than three in 10 (29%) opposed it. The other 9% did not know.

“We closely monitor energy efficiency trends, public opinion, and government policy both here in Ontario and across Canada,” he added. “While we are not surprised by the increase in support for home labelling, we remain concerned that the energy debate continues to centre on energy production instead of conservation. This poll demonstrates there is an increasing knowledge that the least expensive and cleanest energy is saved energy.”

NAIMA Canada commissioned Oraclepoll Research Ltd. to conduct a survey of 1,000 randomly selected Ontario residents. The interviews were conducted via telephone between August 2 and August 8, 2012 (the margin of error for this poll is +/- 3.1% 19/20 times).