April 2, 2015 - Gold miners know value—and not just of precious minerals. At New Gold, energy efficiency also offers value—economic and social value. The company says its mining operations in Canada, the U.S., Mexico, Chile and Australia all adhere to high environmental standards. And its New Afton underground gold mine west of Kamloops is the first mine in North America to achieve an ISO 50001 standard for energy management. 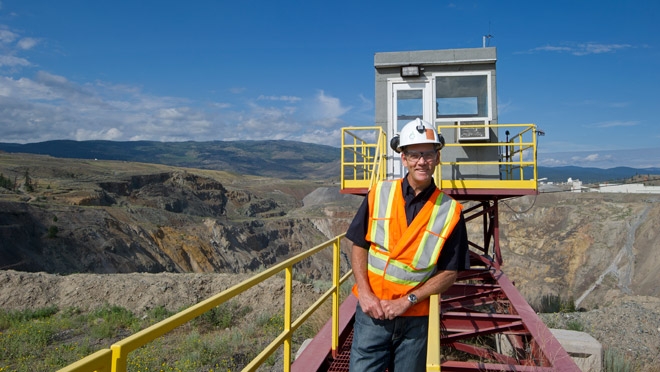 “The mining industry has been focused on energy efficiency and environmental improvement for quite some time,” says Andrew Cooper, energy specialist at New Afton. He notes the Mining Association of Canada’s Towards Sustainable Mining protocol encourages companies to improve environmental performance in all areas. “The ISO 50001 is a new way of looking at it.”

Cooper says ISO 50001 certification goes beyond a project-based focus by embedding energy management into the culture and systems of the company.

“No matter how good your system is, if the people aren’t on board and aware of the system, everything falls apart,” he says.

Cooper started at New Afton in 2011, and the company implemented a comprehensive energy management information system, or EMIS, in 2012.

Energy management starts with a vision, gets support through incentives

BC Hydro supported the effort, providing funding for analysis, energy improvements and Cooper’s position. It’s something Cooper believes other companies should take advantage of. “The funding to allow someone to be onsite full-time to focus on energy management is a huge benefit,” he says.

New Afton implemented a monitoring and measurement system with ISO 50001 in mind. With support from Natural Resources Canada, they then worked towards the ISO 50001 certification. This required an energy review, assessing energy sources, past energy use, and the variables that affect energy use. The review also sets up usage baselines, determines how energy use will be forecast moving forward, and outlines how energy performance and improvement projects will be assessed.

Cooper says New Afton has four components that utilize more than 75% of the mine’s energy: grinding, crushing and conveying, ventilation and mobile equipment.

Efficiency can be achieved through costly projects or simple changes. For example, capital costs for improving the underground mine’s ventilation system were $510,000 and these were covered by the BC Hydro incentive. According to Cooper, with avoided energy use of 7,868 MWh per year, “that represents savings of approximately $300k for an industrial customer”.

But it doesn’t always require a large capital outlay to achieve savings. Shutting down conveyers when they aren’t in use provides a large saving for minimal capital costs.

The ventilation project is near completion and two others have been completed. Relocating an underground compressor cost $540,000. The BC Hydro incentive was $239,000 and avoided energy use translates to about 1,335 MWh per year. Upgrading the flotation blower control cost $150,712, covered by a BC Hydro incentive. Avoided energy use is about 1,412 MWh per year, for about $130,000 a year in savings.

“There hasn’t been one project we’ve implemented to date which has just had an energy-efficiency benefit,” Cooper says, noting improvements have led to cost savings, operational improvements, plus safer, more comfortable working environments with lower noise levels.

“Every single project we do has spin-off benefits apart from energy efficiency benefits, which really do help the operation be more efficient, safer and more environmentally friendly,” he says.

There are also public relations benefits. Although the company’s New Afton mine is the only one with the ISO 50001 energy management standard, Cooper says, “All our mines are ISO 14001 certified with environmental standards. The company commitment to social responsibility and the environment is evident in that.”

Cooper says New Gold couldn’t have done it alone. Assistance from BC Hydro and Natural Resources Canada helped throughout, starting with consulting services of Toronto-based LCG Energy Management and Prism Engineering from Vancouver.

PHOTO: Andrew Cooper says that energy efficiency is best achieved when it’s embedded into every aspect of a company’s culture and business processes. (Photos BC Hydro.)