December 4, 2014 - Highly insulating triple-pane windows keep a house snug and cozy but, based on utility-bill savings, it takes two or more decades for the windows to pay for themselves. 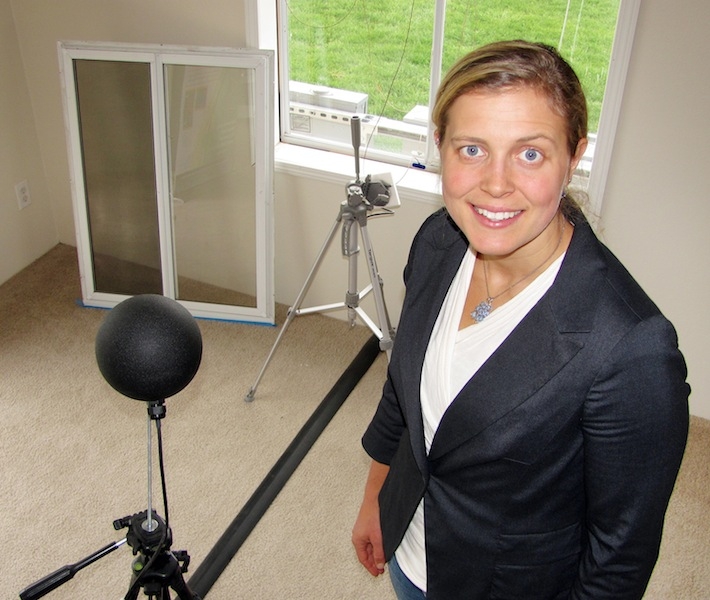 These are the findings of a report by energy efficiency experts at the Pacific Northwest National Laboratory, which are being presented today by PNNL research engineer Sarah Widder (photo) at the Buildings XII Conference, sponsored by ASHRAE.

The report by Widder and senior staff engineer Graham Parker is based on a study at PNNL’s Lab Homes, a pair of identical manufactured homes used to study energy efficiency. Researchers replace one item at a time in one home, such as the windows or the water heater, then compare the performance of the homes.

For this study, the PNNL team studied the effect of replacing aluminum-frame double-pane windows with newer, triple-pane windows (a.k.a. highly insulating windows). The team found the newer windows slash energy use in the home by 12.2% but, because of their high cost, it would take anywhere from 23 to 55 years for the reduced energy cost to make up for the increased expense.

The team notes there are many other factors to consider in addition to money when deciding whether to install highly insulating windows.

“Comfort is also important,” said Parker. “The windows cut down dramatically on cold air radiating from the windows and they reduce temperature variations in the home […] They also nearly eliminate the formation of condensation on the inside of the window which can lead to mould growth and unhealthy indoor air. It’s hard to put a dollar value on comfort and health.”

The PNNL team found an added value during summer months: the newer windows (which have low-emissivity [low-e] coatings that reduce internal solar heat gain) slashed energy consumption by almost 25% during peak cooling times on hot summer afternoons. That benefit is passed along to utilities as less demand on the overall electricity grid at times when demand and price are highest, Widder said.

Widder and Parker say they found an unanticipated benefit of the windows that deserves further study: it is possible that the amount of ductwork in a home, and even the size of the heating and cooling units, could be reduced with the highly insulating windows. That’s because ductwork typically extends to the edges of a room where vents are located near windows to help lessen the drafty feel near the window surface and to help reduce condensation. With more energy-efficient glass in the windows, it’s possible the ducts could be located closer to the centre of a room.

“The money that you save with less ductwork and a smaller heating and cooling system could help pay the additional cost of triple-pane windows,” said Parker.