December 8, 2015 - PepsiCo Beverages Canada produces some of the most widely recognized brands such as 7UP, Mountain Dew, Mug, Aquafina, Lipton, AMP, SoBe, Starbucks, and of course Pepsi. 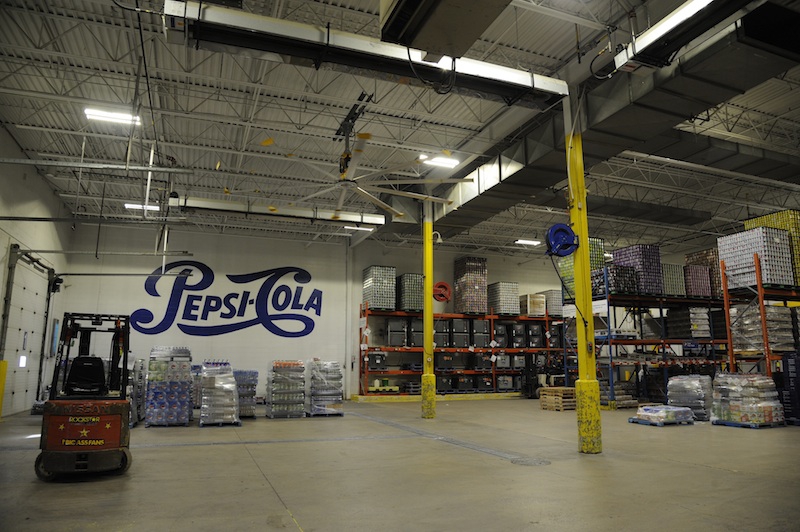 At the PepsiCo facility in Winnipeg, machines churn out thousands of beverages each week. Pallet after pallet of product is moved to the warehouse for storage, while employees work behind the scenes in the facility’s office areas. An efficient, clean, and safe work environment that is also environmentally and cost-conscious is necessary to keep operations moving smoothly, the company says.

“It’s like night and day,” says Shawn Klatt, maintenance planning lead at PepsiCo, of the difference the lighting upgrade has made. “There has been significant feedback from both employees and facility visitors commenting on how the overall environment has improved.”

The upgrade involved removing dated T12, T8, and T5 high-output fluorescent fixtures, along with incandescent and halogen bulbs, and replacing them with the latest LED technology, such as LED fixtures and LED T8 linear lamps. This lessens PepsiCo’s energy costs, as well as the cost of replacement lighting, as it won’t need to be changed as frequently.

While the number of fixtures in the facility was reduced by 25%, the lighting in the facility is actually brighter than it was before, the company says. This is because LED lighting allows for superior direction of light, which means less light is wasted.

Lighting controls help to further direct light where it’s needed. One control pod has replaced more than 20 light switches that had to be turned on and off in the production area and warehouse. With a central control system, it’s easy to turn off lighting zones when they’re not in use.

“When we’re doing maintenance, we don’t need all the lights on,” says Klatt. “We can turn the lights on over the equipment we’re working on. We can also leave perimeter lights on at 20% for security and safety.”

Another notable upgrade was the installation of occupancy sensors that turn lights on when they sense motion and shut them off when there is no motion for a certain period of time. These can go a long way in reducing electric consumption in places where lights would otherwise be left on for eight or more hours per day.

The incentive given for the total upgrades in all four buildings of the PepsiCo Facility, over the past 18 months, was $115,000.

Financial incentives can be up to $1000 per kilowatt saved and as high as 100% of the product cost, depending on the efficiency of the upgrade.