December 12, 2014 - With a hunch that his organization could do better on energy costs, Ray Billings accepted an invitation to BC Hydro’s Power Smart Forum in 2008. “You could see the benefits,” Billings recalls. “In the very first workshop I went to, I thought, ‘Wow. This is going to do a lot for us’.” 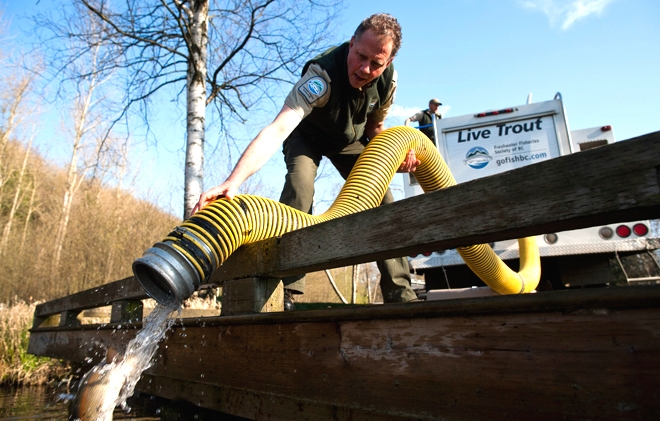 Billings was the vice-president of operations at the Freshwater Fisheries Society of BC (FFSBC) at that time. Within a few months of that forum, the non-profit organization had signed up to BC Hydro’s Industrial Energy Manager program (IEM). Just five years later, Billings’ hunch proved correct. FFSBC has cut its electricity usage in half, saving it thousands of dollars in annual energy costs.

It has also leveraged this investment to become an award-winning industry player, with technology now commercially licensed for sale.

“We’re recognized by our peers as the leader in electrical energy savings in fish hatcheries,” says Billings, who shares his organization’s energy reduction experiences with other fish culture agencies. “That’s all a result of being involved in this Power Smart program.”

Established in 2003, FFSBC operates six year-round fish hatcheries that provide about 8 million fish to 800 provincial lakes and streams per year. Keeping fresh, clean water flowing to juvenile fish “is a life-support operation”, says Billings, so systems must be built to perform.

As in many industries, however, that often meant systems were either overdesigned at the start or did not change as production demands changed, and became inefficient as a result. Involvement with Power Smart led the organization through an energy audit, a strategic energy management plan, and a thorough evaluation of priorities and options for saving energy.

From there, they used Power Smart incentives for upgrades and retrofits, including:

Chief among the changes was the development of FFSBC’s ‘airlift’ technology, which revitalizes and recirculates hatchery water, cutting both energy and water consumption.

The focused energy efficiency effort has paid off in multiple ways, says Billings, who is now FFSBC’s vice-president of strategic initiatives, and its energy manager.

First, the organization is closing in on total annual electricity consumption of 3 million kWh, down from 6.3 million kWh in 2008. That cuts energy costs by about $174,000 per year. Maintenance costs have decreased, too, as equipment runs less intensely and requires less repair and replacement.

The airlift system, along with other water-saving strategies, has slashed water usage, saving 9.1 billion litres of water annually. “That’s 3600 Olympic-sized swimming pools of water that stays in the ground each year,” says Billings.

The non-profit now has set its sights on entrenching the organization’s energy savings through a program of increased employee engagement.

“I call it a win-win-win-win,” says Billings. “It’s a win for us financially; for the public, because our savings can be redirected to new fisheries programs; for our staff, through improved fish culture practices, employee gainsharing and feeling good about our accomplishments; and for the environment.”

“That’s why I wanted to get this story out. It’s incredible, really, what you can accomplish. I hope that when other organizations read this story, they, too, jump on board and begin reeling in the many benefits waiting for them.”

— With files from BC Hydro

PHOTO: Freshwater Fisheries Society of BC releases trout into a B.C. lake. Photo courtesy BC Hydro.