News
Shame on you, Canada! The world’s Second-Worst major economy at energy efficiency

July 12, 2012 - The United Kingdom comes in first place in a new energy efficiency ranking of the world’s major economies, followed closely by Germany, Japan and Italy, according to the first-ever International Energy Efficiency Scorecard published today by the American Council for an Energy-Efficient Economy (ACEEE). 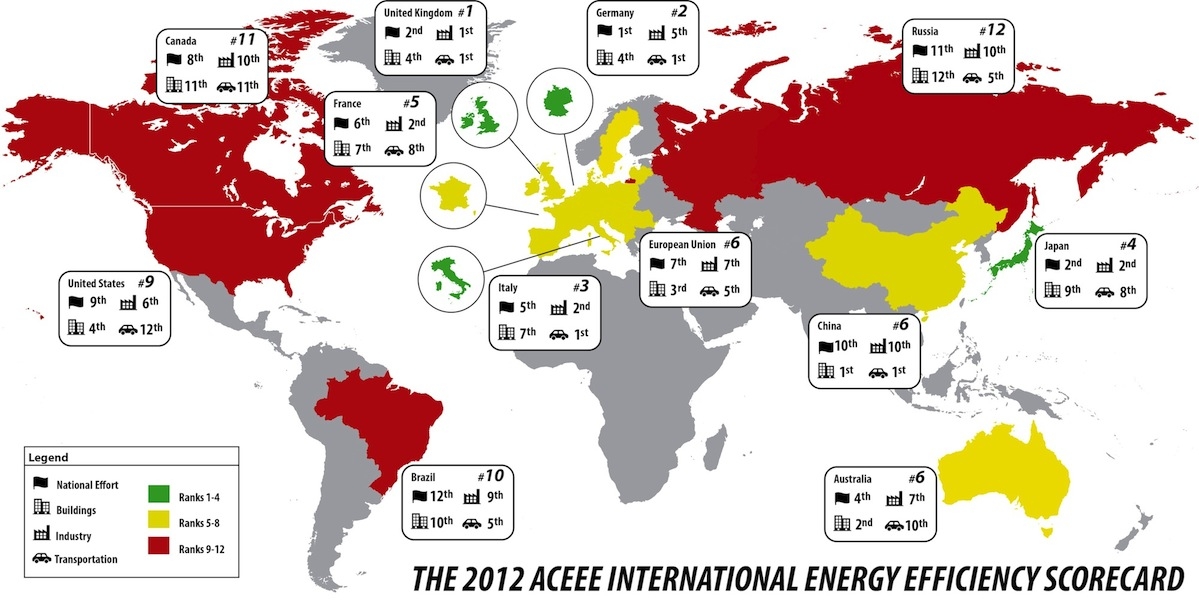 On a scale of 100 possible points in 27 categories, the nations were ranked by ACEEE as follows:

ACEEE executive director Steven Nadel said: “The UK and the leading economies of Europe are now well ahead of the United States when it comes to energy efficiency. This is significant because countries that use energy more efficiently require fewer resources to achieve the same goals, thus reducing costs, preserving valuable natural resources, and creating jobs… While many countries achieved notable success, none received a perfect score in any category—proving that there is much that all countries can still learn from each other”.

Wherefore art thou, Canada?
Canada ranked second-last (just above Russia!), scoring 30 points below the top spot. In Canada, energy productivity is low, and efficiency of thermal power plants is moderate, says the report.

Canada ranked second-to-last in the buildings sector. In Canada, a high amount of energy is consumed per square metre of building floor space, there are no mandatory national building codes, and there is no mandatory building-labelling program, the report points out. Mandatory equipment standards do exist for a large number of products. There are also mandatory, continuous-scale labelling requirements for appliances, with Canada’s EnerGuide label modelled after the EnergyGuide label in the United States.

Canada tied for the lowest score in the industrial sector. ACEEE’s research indicates that effectively 0% of electricity consumed by the industrial sector is generated by combined heat and power. Further, only about 0.5% of GDP is spent on manufacturing R&D, which is among the lowest of the countries considered in the scorecard.

In addition, there is no mandate for energy audits or plant energy managers. However, there is a fairly robust partnership between Canadian industry and the government, called the Canadian Industry Program for Energy Conservation (CIPEC). Over 5000 companies are involved in CIPEC, and there are financial incentives for participation.

Does Canada do anything right?
CIPEC has been successful in reducing the energy intensity of its member companies. In operation since 1975, CIPEC offers its members the advantage of cost-share assistance to improve energy efficiency as well as technical assistance and training.

Canada tied for the second-lowest score in the industrial category. There are a number of policies that could improve this score, including the adoption of mandatory energy audits and mandatory onsite energy managers in manufacturing plants. Producing electricity through the capture of waste heat (combined heat and power) would also dramatically improve Canada’s industrial energy efficiency.

About the scorecard
The rankings are modelled on ACEEE’s approach to energy efficiency ranking of U.S. states, and include 12 of the world’s largest economies: Australia, Brazil, Canada, China, France, Germany, Italy, Japan, Russia, the United Kingdom, the United States, and the European Union. These 12 economies represent over 78% of global gross domestic product; 63% of global energy consumption; and 62% of the global carbon-dioxide equivalent emissions.

The council divided the 27 metrics across four groupings: those that track cross-cutting aspects of energy use at the national level, as well as the three sectors primarily responsible for energy consumption in an economically developed country—buildings, industry and transportation. The top-scoring countries in each grouping are: Germany (national efforts); China (buildings); the United Kingdom (industry); and a tie among Italy, China, Germany and the United Kingdom (transportation).

“While energy efficiency has played a major role in the economies of developed nations for decades, cost-effective energy efficiency remains a massively underutilized energy resource,” said report author and ACEEE senior researcher Sara Hayes. “Fortunately, there is a lot countries can do to strengthen their economic competitiveness through improvements in energy efficiency.”

The ACEEE ranking system looks at both policy and performance metrics to measure a country’s overall energy efficiency. Examples of policy metrics include the presence of a national energy savings target, fuel economy standards for vehicles and energy efficiency standards for appliances. Performance metrics measure energy use and provide quantifiable results. Examples of performance metrics include the amount of energy consumed by a country relative to its gross domestic product, average miles per gallon of on-road passenger vehicles, and energy consumed per square foot of floor space in residential buildings.