News
Star-bright lights for a place that never quits 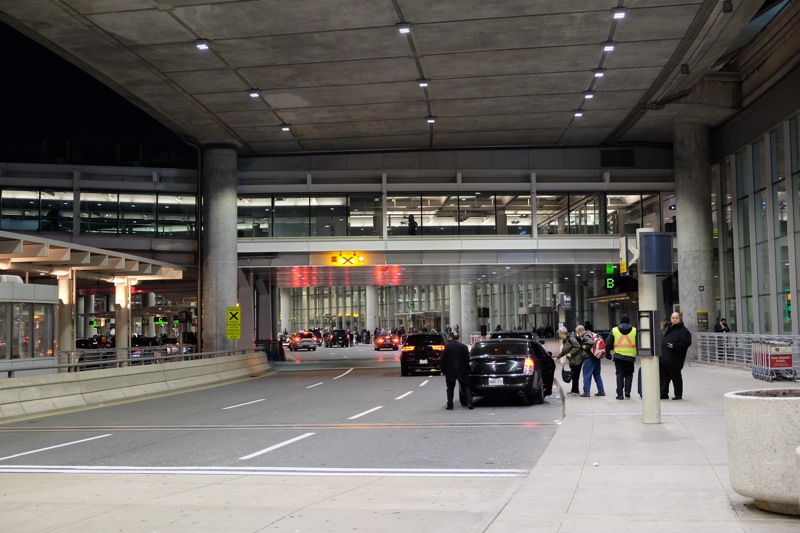 The Arrivals platform at Terminal 1 is newly bedecked with LEDs emitting 7000 lumens each.

“We are a 24-hour operation and very public-facing, so we have to be able to perform maintenance within tight windows and minimize traffic impacts,” Rodgers explains.

Early in 2015 the airport embarked on Phase 1 of an intensive retrofit journey to replace 1000 metal halide fixtures with LEDs on the Arrivals and Service levels of Terminal 1 (known as the Curbside Project) as well as the lights on 20 high-mast poles (there are 10 MH heads per pole) along Hwy 409 leading in and out of the airport.

Rodgers says the projects were sparked by the need to provide visitors with “a better quality of light” and serve as an element of the airport’s overall greenhouse gas reduction plan.

The decision to go into these capital projects meant examining safety, maintenance requirements and the lifecycle of the lighting products, as well as energy savings potential and the overall impact on customers.

Curbside Project
After various products were stationed throughout the Service Level at Terminal 1 for trial runs, which were then followed-up with stakeholder groups, a vetted procurement process selected Cree’s 304 series LED parking structure luminaires for the Curbside job.

“We needed a product that had been tested, tried and true, as well as one that met several standards that would meet our bench test,” Rodgers says. “We looked at preferred manufacturers’ lists, too… We have high standards in airports and that really limits the product options.”

Dark Sky-approved, the 304 lights range from 46W to 69W per new fixture and produce 7000 lumens. They are made from rugged die-cast and extruded aluminum components and feature centrally located drivers and aluminum heat sinks.

“We ran the wires in the same spots and it worked out perfectly; we tried to use as much of the existing infrastructure as possible… and that’s what helps, because everything is embedded right in,” Rodgers says.

Installers did, however, have to add ‘bird cages’ around the bases of the lights to ensure small birds don’t try to build nests up against the driver, which hangs down slightly from the mount.

The previous metal halides were being replaced every two years, causing shutdowns. Rodgers says he doesn’t expect to have to perform any maintenance for at least five years with the new 304s.

Hunter Electric (Woodbridge, Ont.) was selected for the Curbside install, starting and finishing Phase 1 in the fall of last year. The contractor installed 366 fixtures on the Arrivals Level 1 of Terminal 1. (Phase 2—which will see the installation of the same LEDs on the Service Level of the terminal—has gone back to the procurement process for contracting, and is scheduled to wrap up by Q3 2016.)

“Traffic management was the biggest challenge in this job,” says Joe D’alessandro, who founded Hunter Electric with Mark Gentilucci. The work itself was elementary, he adds—“one came down, one went up”—but the location made things interesting.

“It wasn’t a matter of moving from A to B. You had to leapfrog the worksite all over the place—A to G, back to D, then maybe E before back to B—based on the time of day and passengers projected. Everything was constantly changing so you have to be flexible,” Gentilucci says. “It wasn’t uncommon to get a call from one of our guys [telling us] they had to stop what they were doing because three flights just came in.”

Communicating with GTAA staff on a daily (sometimes hourly) basis was key to the project’s success, the men say.
Six crew members were pulling 7-hr to 10-hr days, with evening work when required, to meet the GTAA’s deadline of the first week of December 2015. They were able to wrap up early, with the last LED going in at the end of November.

“It looks simple because you see just a bunch of guys on scissor lifts and zoom booms, but it’s not for every contractor,” Gentilucci says. “We’ve been fingerprinted and eye-scanned… [Pearson is] a high-security area, so there’s a lot of energy that goes into getting the job done.”

Similar processes were used to determine the product best suited for the retrofit on the beanstalk-like, high-mast poles along Hwy 409.

“With this one, we had very specific technical requirements as we weren’t replacing the whole pole,” Rodgers explains, “so we needed lights that would fit on the ‘wagon wheel’ we already have up there… and they had to be the right weight and specifications to suit the pole, too.”

The winner among the various options was Eaton’s McGraw-Edison Galleon LED luminaire, which comes with a 5-year warranty and promises a 60,000+hr rated life. At 421W, it has eight squares and produces 40,000 lumens. Using Eaton’s AccuLED Optics system, the Galleon is 3G vibration rated, has an IP66-rated housing, an extruded aluminum driver enclosure and heavy-wall, die-cast aluminum end caps. It is designed to operate in ambient temperatures from -40ºC to 40ºC, with an optional 50°C high-ambient configuration. The proprietary circuit module is designed to withstand 10kV of transient line surge.

The Galleon decreases the load on the pole structure itself, as the LEDs are lighter than the previous lights, Rodgers adds.

Black & McDonald (Toronto, Ont.) was selected to manage this installation. To avoid aerial tools, a lowering device was used to bring the wagon wheel to ground level for retrofit. Crews changed nine of the fixtures by the end of 2015. Phase 2, currently underway, will see the final 11 switched over by Q2 2016.

Relamping to be better
With the problem of flickering metal halides largely in the past, Rodgers says the retrofits couldn’t have worked out better.

He says there were few to no obstacles, other than the time it took to vet the products and contractors, adding that the feedback on the changes so far have been nothing but positive.

“We were able to increase the light uniformity on the floor [Curbside] and colour rendering index, providing a safer environment. There’s no glare and less dark spots, we find, so it provides a level of comfort, too. That’s been the big thing customers and our stakeholders notice: no glare.”

On Hwy 409, the LEDs “dramatically” reduce light pollution as they “beam straight down versus spreading out and toward the sky,” Rodgers notes. “You get a better amount of light on the road, creating a safer situation for drivers, and people who live near the 409 will not have their sightlines interrupted… we want to be good neighbours.”

Both projects have been incentivized through Ontario’s saveONenergy program (which helped with measurement verification and technical review). Combined, the two projects will save GTAA about 2262 MWh/year, Rodgers says: the Hwy 409 initiative will reduce energy output by 664.3 MWh/year and boasts a 5-year payback, while the Curbside job reduces about 1597 MWh/year and should see payback in two years.

Pearson is also undertaking a total overhaul of the interior lighting throughout Terminal 3 as part of bigger redevelopment over the next four years. And it doesn’t end there: 2016 will also see the end of CFLs in the service tunnels under the runways.

“Our senior authority really understands the value of energy efficiency, and that’s huge when it comes to being able to do projects like this,” says Rodgers.

The Arrivals platform at Terminal 1 is newly bedecked with LEDs emitting 7000 lumens each.