March 11, 2018 - UBC chemistry researchers say they have developed a simple, cost-effective technique for making smart windows that could lead the way for wide-scale adoption of this energy-saving technology. 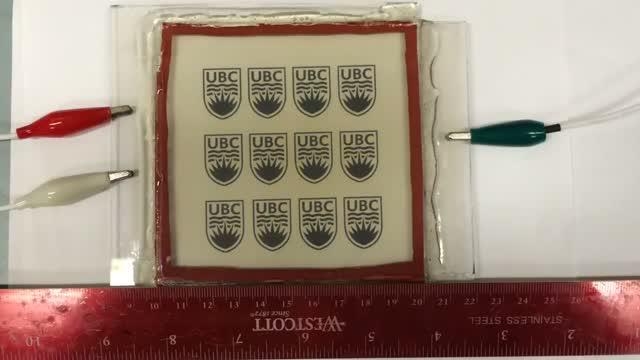 Smart windows conserve building energy by switching from clear to tinted, dynamically controlling heat and light from the sun, depending on the building and occupants’ needs.

“Conventional windows waste a third of all energy used to heat, ventilate and air-condition buildings,” said prof. Curtis Berlinguette. “Smart window technologies offer the opportunity to reduce these energy losses, but the main challenge is finding ways to make these windows less expensive.”

Wei Cheng, who led this project as part of his post-doctoral work at UBC, found a new way to make glass materials that change colour in response to electricity, building on a technique co-developed in Berlinguette’s lab. Cheng’s method deposits a liquid solution containing a metal ion onto glass, then uses UV light to transform it into a film that coats the glass. The film is completely transparent but becomes blue when electricity passes through, ultimately creating the active component of a smart window.

Smart windows currently cost about $500 to $1000-m2 to make, much higher than the $30 to $200-m2 cost of a conventional glass window. With this new method, windows could be manufactured without high temperatures or the vacuum equipment currently used to make such devices, thereby reducing the cost.

“Our technique creates a uniform dynamic coating without the need for special instrumentation,” said Cheng. “Another advantage of our method is that it is compatible with many different metals, and it is scalable.”

Berlinguette and Cheng continue to work to prove the technique by making larger windows that are stable for extended periods.

“A commercial window needs to last many years, and we need to prove our windows can do the same,” said Cheng, who also noted that they were experimenting with more neutral tints so the windows would turn grey instead of blue.

The paper describing this technique, “Photodeposited amorphous oxide films for electrochromic windows”, was published in Chem.

— With files from Heather Amos

Related
VIDEO – Partners in Project Green launches 2012 Awards (June 2012)
VIDEO – What would you do with over $100,000?
VIDEO – GE Lighting Tour provides a “value story” for customers and end users
VIDEO – Down with bioenergy, wind farms and green councils?
Tags