November 25, 2015 - “There are many ways to plan for an energy efficient future,” Serge Imbrogno, Ontario’s deputy minister of energy, told the packed room gathered earlier this week in Mississauga, Ont., for Energy 2015. Attending the annual conference, titled Energy Opportunities in Changing Times this year, is one of those ways. 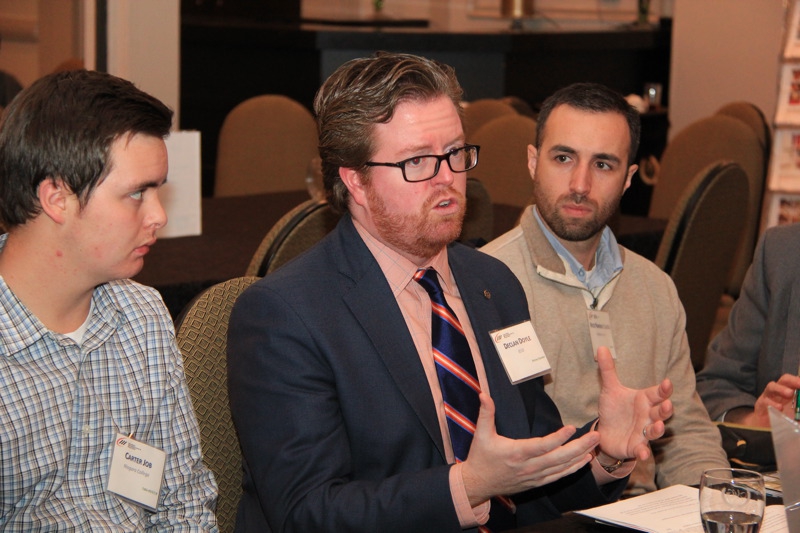 Declan Doyle of the IESO answers questions on incentive programs during the roundtable sessions at Energy 2015.

The full-day event, hosted by Canadian Manufacturers & Exporters, dove into the issues Ontario’s manufacturers are experiencing as electricity costs continue to rise. A number of speakers, panels, and a lively afternoon of roundtable discussion took a closer look at the Cap & Trade program, incentive programs, keeping the supply chain healthy, and other things that can be done from an energy perspective for the province to remain competitive.

Electricity in Ontario has “really” changed in the past decade, largely thanks to the phasing out of coal, said Terry Young, vice-president of conservation and corporate relations with the Independent Electricity System Operator (IESO).

“We have adjusted our reliability issues but it’s come at a cost,” he added, speaking to the prices that are predicted to keep on escalating. “We are looking at market mechanisms to address that need for flexibility and the uncertainty we do see in the future.”

Paul Grod, president and CEO of Rodan Energy, stirred the pot a little more when he mentioned the idea of a carbon tax for imported goods based on—among other things—carbon in the power system, in order to “give Ontario a fighting chance.”

Grod also talked about the importance of rebates for a low carbon footprint and ensuring market-based procurements. He recommended reducing manufacturers’ energy spend with demand management tools and strategies (“which are not for the faint of heart”) and noted the “costs are too great for missing the 5 CP”— meaning the 5 Coincident Peak program.

Ian Shaw, the energy manager for steel producer ArcelorMittal Dofasco, elaborated on what they are doing to cut costs. This includes things like replacing all the fixtures at the Temper Mill with LEDs (LDC SaveOnEnergy incentive) and installing a refurbished 12MW turbine generator to generate electricity using excess by-product gases (IESO IAP incentive).

Incentive programs are critical, said Shaw. “If the incentives had not been there, we would not have had as appealing a business case.”

It’s important to remember energy costs are not fixed costs, Union Gas’s Mark Glasier told the conference crowd, recommending facilities organize an energy team and get updated training and certification (such as from the Canadian Boiler Society and Steam Traps programs).

“Take advantage of the resources—get a screening to determine if self-generation is right for your facility… It’s about making energy management the culture in the company,” Glasier said.

The province’s Cap & Trade system (to go live in January 2017) was touched on by Duncan Rotherham of ICF International.

“Ontario is engaging with large emitters now to assess level of emissions exposure and determine gratis”, Rotherham said. “We can’t get to our 2030 targets without changing the energy we use and changing how we use it.”

He added that it is not a “foregone conclusion that industry will be protected from the price of carbon.”

All presentations will be available on CME Ontario’s website.

Declan Doyle of the IESO answers questions on incentive programs during the roundtable sessions at Energy 2015.