November 22, 2013 - Schneider Electric has launched the fourth edition of “Go Green in the City”, a global business case challenge focusing on innovating energy solutions for the city. 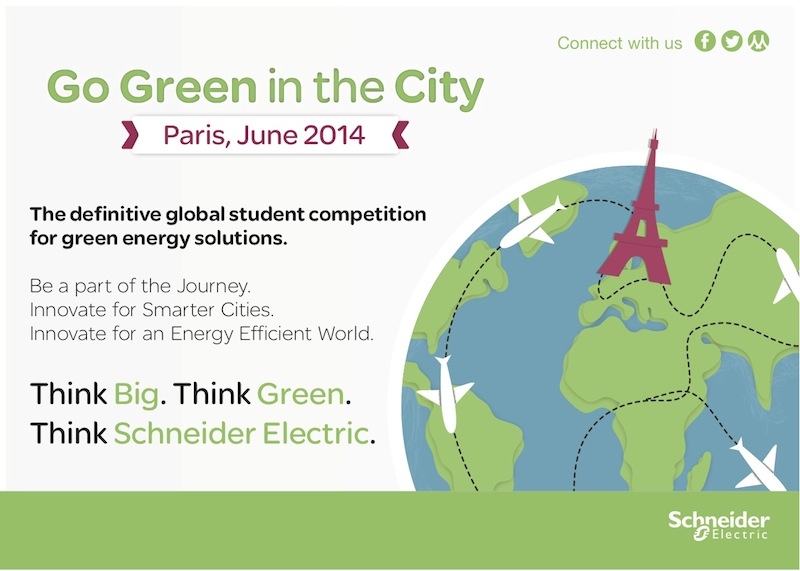 The increased relevance of energy issues to students all over the world, in particular new economies, is important for Schneider Electric, says the company, which decided to launch a new and extended edition of the contest. It says “Go Green in the City 2014” case challenge is “the definitive global student competition” for green energy solutions, with more than a dozen new countries participating, bringing the total number of countries to 31.

Schneider says the ongoing interest in the contest demonstrates that future engineers are more aware of the need for increased demand for electrical power, and that it will have to be balanced with social progress and environmental protection.

From November 15, 2013, to February 15, 2014, business and engineering bachelor (2nd year and on), master or MBA students from all over the world are welcome to join the challenge by forming a two-member team, with at least one of the members being a female. They must submit a case study illustrating their ideas for viable energy management solutions for one of the five basic urban sectors (residential, university, business, water and hospitals).

To gain expert tips about their case and have the possibility to gain a unique insight into one of the leading energy management companies of the world, students can unlock a creative challenge through an online game quiz. So far, more than 1744 pre-registrations representing 81 nationalities from all over the world have been received.

The top 100 teams will be announced February 28, 2014, and will have a month to work with a mentor from Schneider to create a synopsis and a video business case for their idea. The 12 best teams will then be flown to Paris in June 2014 to compete in the final. The winning team will travel the world with Schneider, visiting facilities, networking with employees and high-level management, and be offered jobs within the company.