March 5, 2015 – Since he took on the team leader role for the operations group at Ideon Packaging, Mike Nunn has been asking questions. 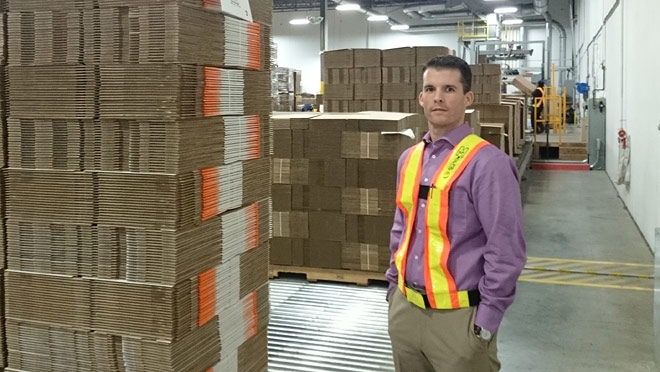 “For me, the big deal really comes down to this: when you look at the operation and where we’re spending our money, are we thinking about all the areas where we could be doing better?” he asks. “The way we use energy is one of those areas.”

The plant was using 400-watt metal halide lamps. Because the lamps were mounted too high to reach with in-house equipment, the company would wait until enough had burned out and hire a scissor-lift to come in and replace bulbs.

That was a high cost and a process that Nunn and his colleagues decided no longer made sense.

“And as we got into it, we realized there were some great energy savings if we switched to T8 fluorescent lights,” he adds.

Ideon’s lighting retrofit qualified for financial support through the Self-serve Incentive Program (SIP). Now the company is saving on energy and maintenance costs, and the plant no longer has dark corners as lamps burn out.

Growth and change at the company brought the next energy-saving opportunity.

“Production was getting busier, we were running more and expanding our shifts,” says Nunn. Even with two compressors, there wasn’t enough air to keep up with production needs.

Rather than simply adding capacity, the company worked with members of the Power Smart Alliance to assess its compressed air system. Ideon’s compressor upgrade is estimated to save 64,000 kWh of energy per year, about $5,000 per year in energy cost.

“By going above and beyond, and changing to a variable speed compressor, we were able to realize large energy savings, and qualify for BC Hydro support through SIP,” says Nunn.

It seems almost counter-intuitive, but the need for more air has resulted in reduced energy consumption.

“I can’t tell you what the catalyst was that got me started thinking about energy efficiency, where I learned about power factor and who originally told me about capacitors. But that was the start of it,” he says.

“I realized that it’s not just about running equipment and using power and paying the bills. There’s way more to it than that. You can affect it. You can change it by having efficient equipment, by choosing how you’re using energy. It’s something completely within your control.”

PHOTO: Mike Nunn of Ideon Packaging in Richmond says a series of efficiency upgrades have cut energy costs, including a compressor upgrade that saves $5,000 a year.