October 29, 2013 - Vast energy sources are slumbering below big cities, say researchers from KIT and ETH Zurich, adding sustainable energy for heating in winter and cooling in summer may be extracted from heated groundwater aquifers. 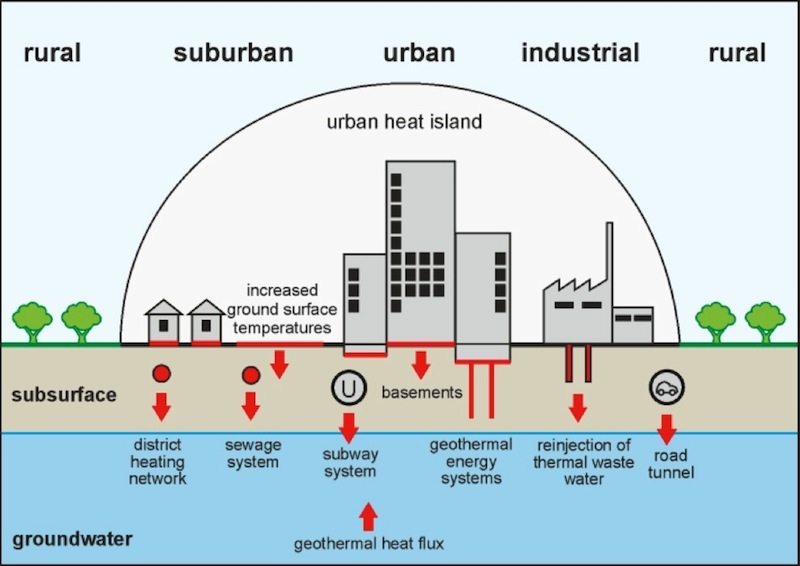 Temperatures in big cities are far above those in the surrounding rural area; dense settlement, surface sealing, industry, traffic and lack of vegetation cause an urban microclimate with increased temperatures in the atmosphere. Temperature anomalies also develop underground, spreading laterally and vertically.

The researchers studied the origin of heat in the underground of conurbations (extended urban areas). They developed an analytical heat flux model to examine factors, such as the increase in temperatures of sealed surfaces, heat release from buildings, sewage ducts, and underground district heating networks, as well as discharge of thermal wastewater.

By modelling anthropogenic heat fluxes into the underground of the city of Karlsruhe, the researchers determined long-term trends of heat flux processes. They found that the increased surface temperature and heat release from buildings, in particular, are responsible for the increase in temperatures in the subsurface area.

As such, the energy from close-to-surface groundwater aquifers might be used for heating in winter and cooling in summer via geothermal heat pumps and groundwater heat pumps. This geothermal potential would not only cover part of the growing demand for energy, but also reduce the emission of greenhouse gases.