October 1, 2015 - Hemlock Printers is a recognized for its work to reduce waste, promote eco-friendly papers, and help clients reduce their environmental footprint. The 47-year-old Burnaby-based company has worked with Climate Smart to reduce its carbon footprint, and even offers clients carbon-neutral printing. 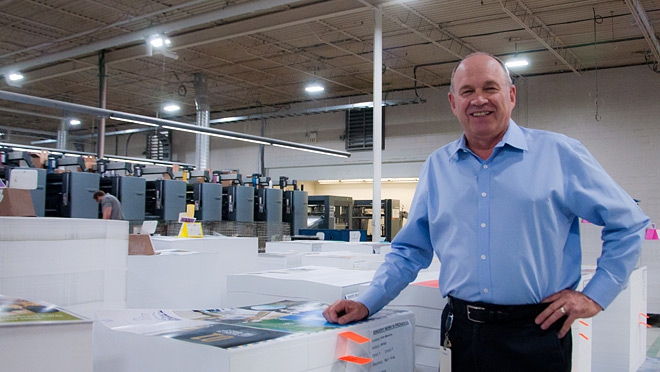 And Hemlock recently went out and cut its energy use for lighting by more than a half.

Management won over by newer LEDs’ longer warranties and lifespan

Hemlock started to consider LED lighting for its production floor in 2013 after an energy assessment identified that it was spending more than $20,000 per year on energy for lighting. The culprit was the company’s 74 old-fashioned high bay 400W pulse-start metal halide lighting.

“We looked at LED lighting at the time, but we weren’t very confident in the fixtures available,” says Jeff Taylor, a Hemlock vice president. The lamps’ manufacturers weren’t well-known, and the fixtures came with only a one-year warranty. In addition, the project price tag of $150,000—even with a BC Hydro incentive—yielded a 6.7-year payback period.

“It just didn’t make financial sense and it had risk, so we basically decided to shelve the process for a while,” says Taylor.

But things change. Especially in the world of industrial lighting.

Total energy usage reduced by 8.2%, with a payback period of about two years

In 2014, Commercial Lighting, a member of the Power Smart Alliance, introduced Hemlock to new LED technology produced by General Electric and manufactured in North America.

With costs coming down and fixture lifetimes on the rise, these LEDs offered a five-year warranty and a 10-year life expectancy, changing the business case significantly. With the BC Hydro incentive, the payback period was about four years—or less.

Considering the life cycle cost of an LED upgrade further improved the math. “We were replacing metal halide bulbs at about $60 a bulb and about $2,000 a year, so as we considered that, we were looking at about three years’ payback,” says Taylor. “Then when you factor the time and the effort and the disruption to the operation for all that maintenance, then that’s closer to two years.”

The project was a go. Hemlock worked with Ida Keung, their business energy advisor, who helped them coordinate with Commercial Lighting and assist with their BC Hydro funding application through the Self-serve Incentive Program. Hemlock received an incentive of $32,000. With energy savings of more than 115,000 KWh/yr, the LEDs cut Hemlock’s energy bill for lighting by more than half, from about $23,000 a year to $9,500. Taylor says the plant’s total electricity bill is down 8.2% from a year ago, with most of the credit going to the LEDs.

Metal halide lamps require at least three minutes on start-up to reach full brightness, and they lose light output steadily as they age, contributing to dim spots across a production floor. They can also change colour, adopting a blue, pink, or yellowish hue as the gasses within them decompose.

By comparison, LEDs reach full brightness instantly on start-up and maintain a much better light output over their lifetime. And Hemlock requested their lamps to be set at an industry-standard colour temperature of 5000 degrees Kelvin—akin to natural sunlight.

“From a production point of view, the new lighting is very stable; it’s brighter and more consistent across the plant,” says Richard Kouwenhoven, Hemlock’s president and COO. “We’re doing lots of fine colour reproduction, so although it’s hard to quantify, having better, more stable lighting in the production facility has lots of benefits.”

The LEDs direct light more accurately than metal halides, so light reaching the work level is now 20-25 per cent better than before. “We’re getting more even lighting, for basically less cost,” says Taylor. He says a number of employees have commented that the lighting makes them feel better, with less need to rest and fewer headaches.

He also believes the cooler LED lamps contributed to a comfortable working climate in the plant during 2015’s unusually hot summer.

Along with the new lighting, Hemlock installed proximity controls (motion sensors) on each fixture. After 15 minutes sensing no activity, a lamp dims to 20% output; after another 15 minutes, it shuts off. Because of the quick start-up and dimming abilities of LEDs, when they need to switch on again, they do so with a smooth transition back to full intensity.

Taylor says the system has a thumbs-up from staff, who are sometimes the company’s strongest environmental critics.

“In the past, if we had a shift with only one crew in one location, we still had to light 50,000 sf because there was no viable alternative with metal halide. They’ve come forward and said they used to worry about the energy waste, so they see the new system as responsible leadership by the company, and the right thing to do.”

“LED lighting technology is ready for the mainstream,” says Kouwenhoven. “Energy use is often a significant expense for industrial businesses, so it’s worth taking a serious look at any initiative that reduces costs while providing other benefits. The energy savings are only one of many benefits that made this a great investment for us.”