March 4, 2016 - Tweaking ventilation and temperature control systems—along with a mild winter—helped the experimental Net Zero-energy house at the National Institute of Standards and Technology (NIST in the U.S.) quadruple the amount of surplus energy it sent to the grid during its second year-long demonstration. 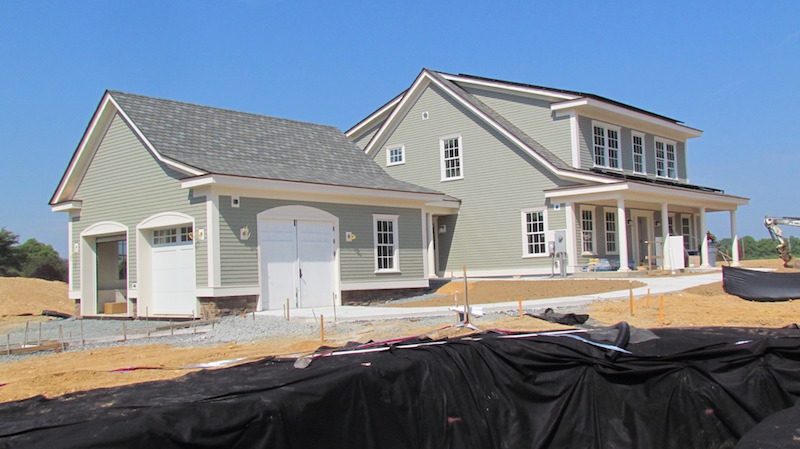 West side and front of NZERTF. Painting of siding completed and sidewalk/driveway nearing completion. Courtesy NIST.

On top of eliminating an annual electricity bill of about $3670—the average for a similarly sized home in Montgomery County, Md.—the 2139-kW energy surplus garnered a refund cheque of about $80 from the local utility. From February 1, 2015, to January 31, 2016, the 2-storey, 4-bedroom house’s rooftop solar power system generated a total of 13,717 kWh of electricity.

We first reported on the house in July 2014.

The energy surplus jumped 1655 kWh over the previous test year. More than 90% of this increase stems from reduced energy use, achieved without sacrificing indoor comfort. A slight gain in energy generated by the solar PV panels—about 140 kWh—accounts for the remainder.

West side and front of NZERTF. Painting of siding completed and sidewalk/driveway nearing completion. Courtesy NIST.

Milder weather during the second year-long testing of NIST’s Net-Zero Energy Residential Test Facility (NZERTF) contributed to about half of the drop in energy use, according to a computer modelling study by NIST economist Joshua Kneifel. The other half of energy savings results from efficiency-improving adjustments in a house, which is already designed to be 60% more energy efficient than houses built to meet the requirements of the 2012 version of the International Energy Conservation Code (IECC).

Hunter Fanney, who leads the research at the NZERTF, credits two technical tweaks for the most significant gains in efficiency.

He attributes the majority of the savings to changes in the control logic associated with the house’s heating system. During both demonstration periods the same air-to-air heat pump system was used to heat and cool the house. During the heating season, the system extracts heat from the outdoor air to warm the indoor air, and then delivers the heat to the interior of the house.

“During the first year, the control logic was ‘overanxious’ during cold-weather conditions,” Fanney explained. “It often energized the back-up electric resistance heating system, even though the heat pump was capable of maintaining the desired indoor temperature. So, we switched to a more ‘patient’ control strategy that greatly reduced the use of less-efficient electric resistance heat yet maintained the same comfort levels within the home.”

NIST researchers also dialled down the NZERTF’s outdoor ventilation rate by 25%, lowering it to the rate required by ASHRAE 62.2 (2010). During the first year, the NIST team chose not to modify vendor specifications for any control associated with the house’s various systems. Reducing the vendor-prescribed ventilation rate so that it met—but did not exceed—the standard trimmed energy consumption by about 3%, Fanney says.

The 2700-sf test house features the full array of modern amenities and would blend in nicely in a new suburban subdivision, says NIST. In addition to energy-efficient construction and appliances, it features energy-generating technologies such as solar water heating and the solar PV system consisting of 32 panels, each producing 320W of electricity.

The NZERTF is home to computer-simulated versions of two working parents and two children, ages 8 and 14. Their daily routines and energy-consuming habits are scripted and imitated by computer, based on occupant profiles developed by the U.S. Department of Energy. Members of the virtual family bathe, shower, cook, turn on lights when they enter rooms, do laundry and relax by watching TV, listening to music, posting on Facebook and playing video games. Computers even control devices that mimic the heat and moisture released by the virtual family’s breathing and perspiring.

On the basis of two years of performance results, Fanney surmises that the NZERTF’s PV system could be downsized by as much as 20-25% and, most years, the house still would reach its net zero goal—producing as much energy as is consumes over 12 months. The results also suggest that such a house could be built on a less-than-optimal site—not facing true south, for example—and still meet its goal, he says.

That change would reduce the front-end costs of building a Net Zero house, shortening the payback period for recovering the additional investments necessary to meet the goal.

Other efforts to make achieving this goal easier and more cost-efficient will progress as technology becomes more energy efficient and as research at the NZERTF and elsewhere point to new opportunities for reducing energy use and improving onsite energy production, Fanney says.

— With files from Mark Bello. Chart shows energy use and production for NIST’s Net-Zero Energy Residential Test Facility in Gaithersburg, Md., from February 2015 to January 2016. Photo of whole house shows west side and front of facility. Painting of siding completed and sidewalk/driveway nearing completion. Photo of worker shows him installing solar thermal collectors on porch of NZERTF. Chart and photos courtesy NIST.